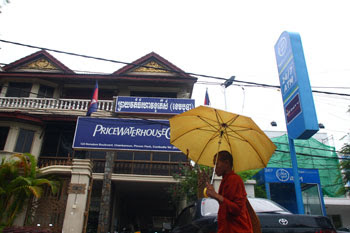 Photo by: Sovann Philong
Accounting firms like PricewaterhouseCoopers could find themselves in hot demand as domestic firms clean up their books in readiness for a listing on Cambodia's first stock exchange.
http://www.phnompenhpost.com
Written by NGUON SOVAN AND MARIKA HILL
Wednesday, 17 June 2009

Finance Minister Keat Chhon urged private and state-owned companies to improve their accounting standards to improve public confidence in the country's firms ahead of the launch of Cambodia's first stock exchange.

Rigorous financial reporting standards would be a key requirement for those hoping to list on the exchange, which is scheduled to open later this year, he told attendees at an accounting standards workshop Tuesday in Phnom Penh.

"To borrow money from commercial banks, the company must have collateral," he said. "But for the stock market, there is no collateral in exchange for [capital] but only reputation and confidence [earned] through the accurate practice of accounting standards."

Keat Chhon said the stock market is still set to launch by the end of the year as planned, but that the launch date depends on the readiness of the state-run companies currently preparing to list.

"We have not set the date to launch Cambodia's stock market, but before the start we have to require companies to strictly comply with standard accounting practices," he said.

He declined to name the companies that are being readied for a listing, but the Post understands they are Electricite du Cambodge, the Phnom Penh Water Supply Authority and Sihanoukville Autonomous Port.

Transparency for cash
Ming Bankosal, director general of the Securities and Exchange Commission of Cambodia (SECC), said it was critical for companies that wanted to raise money on the exchange to introduce best practices into their financial reporting.

"Financial reports following accepted accounting standards are the most valuable tool for securities investors, [be they] retail investors or institutional investors," he said.

"In every decision to invest in a company, investors have to analyse the financial statements of the company."

Kuy Lim, a senior manager at accounting firm PriceWaterhouseCoopers (Cambodia) Ltd, said companies wishing to list on the Cambodian Stock Exchange needed to start identify gaps in their accounting practices and training key personnel now. The emphasis of training should be on moving beyond simple record-keeping into the analysis of financial records.

However, finding talent will be a critical challenge for companies because of the limited number of skilled and experienced accountants in the country and the lack of a Certified Public Accountant (CPA) programme, he said, and English skills are also critical.

Around 120 private and state-owned companies participated in the workshop, which included presentations by financial experts and the Ministry of Economy and Finance, as well as case studies of companies listing under other countries' stock exchanges.

PPWSA also presented its financial accounts, which were fully computerised and audited by PriceWaterhouseCoopers in what was a clear sign the company is indeed likely to be a founding member of the bourse.

ACLEDA Bank President In Channy said Tuesday that his organisation has already met the requirements of a listing on the proposed exchange, including good governance, internal and external audits, and international ratings, but that the bank had not made a commitment either way. "We will wait and see first," he said. "It depends on the practical situation."

He added that the bank had no need to raise financing through a public listing, as it had sufficient capital and liquidity. It also had seven key patrons who could provide a capital injection if required, he said. "However, when we need more capital, we will list."

Wong Chong Kim, deputy CEO of OSK Investment Bank Malaysia, the investment arm of OSK Group, which also owns OSK Bank, told a seminar in Phnom Penh last week that it intended to invest in companies listed on the exchange. "I wish to ... reiterate that the OSK Group is indeed eager to participate in the financial and capital market of Cambodia," he said.
Posted by CAAI News Media at 9:41 pm