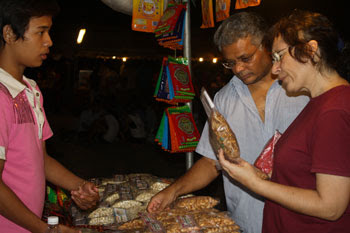 FOR Lor Sun Thoeun, cashew nuts run in the family. Since learning from his father-in-law how to process the raw cashew fruit into dried nuts, Lor Sun Thoeun, director of Tang Sok Hak Enterprises, has found success as a self-made businessman on the back of the humble nut.

"While an undergraduate at university, I dreamt of becoming a producer in a small business, to produce something made in Cambodia," he said. "Now my dream has come true; my business is successful."

But success has come with years of hard work for Lor Sun Thoeun, who started his cashew-nut processing business in Phnom Penh's Stung Meanchey district in 1995, with an initial investment of US$20,000. At that time, he said, the business employed just five staff, who collected raw cashew nuts from Kampong Cham and Kampong Thom, then removed their skins and dried them.

Lor Sun Thoeun says that his factory, which now employs 25 staff, can produce between 400 and 500 packages of premium cashews per day, which are sold to clients in Phnom Penh, Kampong Chhnang, Battambang, Siem Reap, Pursat, Sihanoukville, Kratie, Kampot and Kampong Cham provinces.

"My product is sold at [Phnom Penh's] Night Market, shops, karaoke clubs and markets in Phnom Penh," he said.

Each month, Lor Sun Thoeun says he orders a shipment of raw cashews from Kampong Cham and Kampong Thom province for processing. The best quality nuts, he says, are to be found in Kampong Thom province, but he said that while packaging cashews was an easy business, producing a high-quality nut that can be preserved for a long time is very difficult.

"Right now, we still lack the technical know-how about how to preserve cashew nuts for a long time," he said, adding that he was continuously researching new techniques to help increase the shelf life of his cashews. The shelf price of cashews produced by Tang Sok Hak Enterprises varies from between $10 and $13.50 per kilogram.

But like many local businesses, Lor Sun Thoeun says he has taken hits because of the global economic downturn, with business falling by 50 percent since the crisis hit in late 2008. "Late last year, my business ran well: I earned about $800 per day. But now I'm earning only about $400," he said.

Overall demand falling
Lor Sun Thoeun said Tang Sok Hak Enterprises had also experienced a drop in demand for its beef jerky production, which, despite being a more dependable end product, had still been undermined by the crisis. He added that the factory could produce between 50,000 and 100,000 packs of dried beef per day, but that production - like cashew production - had fallen. "I used to be able to earn $2,000 per month [from dried beef], but now it has been fallen by around half," he said.

To help local producers and alleviate the effects of the economic crisis, he called on the Cambodian government to provide cheaper electricity and petrol and help local SMEs bring their products into competition on the international market.
Posted by CAAI News Media at 9:29 pm