A(H1N1): is Cambodia ready to face a pandemic? 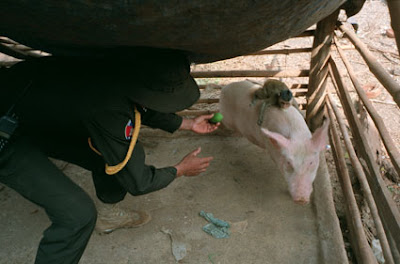 While its Vietnamese and Thai neighbours have recently identified individuals infected by the A(H1N1) virus on their territory, Cambodia still seems unaffected – as it had been during the SARS epidemic – by what is now presented as the new global health threat. Without giving in to panic, the Cambodian authorities make no secret of their high concern and multiply calls for vigilance, reactivate systems already implemented for the prevention of H5N1 and go for transparent cooperation with international organisations. Struggling with the economic crisis, the Khmer Kingdom would have gladly done without a health crisis caused by a new virus, while concerns still exist over the evolution of the avian influenza.

Cause for concern
“Cambodia is rather well prepared for the risk of pandemic,” observed, with cautious enthusiasm, Dr. Sok Touch, director of the Communicable Diseases Control (CDC) Department in the Ministry of Health during a telephone interview with Ka-set on Thursday June 4th. Neither blindly optimistic or excessively pessimistic, the official is keen to highlight the efforts made by the Cambodian authorities in the prevention of infectious diseases, including the A(H1N1) virus, while reminding also the limitations in a context of uncertainty.

“We are working in close cooperation with the National Committee for Disaster Management (NCDM), the [World Health Organization http://www.who.int/csr/don/en/ WHO – Influenza Updates] (WHO) and the relevant bodies on the issue of the A(H1N1) influenza, to identify possible cases,” he explained, detailing all the measures officially taken since late April to face the threat.

The central role of communication
The first measure announced by the Ministry of Health and the WHO Cambodian office was the creation of a special task force, in charge of coordinating communication on the evolution of the A(H1N1) virus. It is supposed to be at the heart of the new national system of prevention of the pandemic, and comprises representatives of the Ministry of Health, the NCDM, the WHO and the other United Nations specialised agencies, the Cambodian Red Cross and the MediCam NGO.

Following the same logic of coordination and resource sharing, the Ministry, in close collaboration with the WHO, created a multi-sectoral plan of action which takes into account the health, social and economic dimensions of the crisis.

As for the treatment, Sok Touch stresses that Cambodia has “national antiviral stocks and access to regional stocks, which covers the needs of about 25% of the population,” thanks to the “assistance and donations of Asian countries in particular.”

Finally, the CDC director reminds, thermal scanners, used during the SARS crisis in 2003 and since put away, have returned in the arrivals area at the international airports of Pochentong (Phnom Penh) and Siem Reap, while the newly-arrived now have to fill in health forms before entering the territory.

No new measures
Aside from the resumption of the use of thermal scanners – that is existing material –, most of the measures announced are actually only adaptations of systems already put in place for the prevention and detection of the H5N1 virus. The isolation rooms in the Calmette hospital, in Phnom Penh, meant for potential patients with A(H1N1) influenza symptoms and visited by the Minister of Health on May 13th, have existed for a long time. Identical quarantine structures also exist in the regional referral hospital in the touristy town of Siem Reap since 2003, which were created at the time of the SARS crisis and renovated two years later to cope with the H5N1 virus.

The two hotlines devoted to the A(H1N1) virus, presented on April 29th and mentioned in various press releases, are no other than those receiving since 2006 the calls of people signalling suspect cases or seeking more information on the H5N1 virus.

Similarly, important antiviral stocks had already been made to fight against H5N1 and its potential transformations, at the national level but also and most of all, at the regional level, as part of ASEAN+3.

Finally, a multi-sectoral plan of preparedness and response for avian influenza was launched in late March 2008 and is scheduled to continue until December 2011, thanks to assistance from the World Bank, Japan and the European Union. This very wide plan will be adapted to respond to the new situation of a virus which, this time, is transmissible from human to human.

A(H1N1) and H5N1, same fight?
So, there are no significant innovations in the range of measures supposed to respond specifically the A(H1N1) threat. According to Sok Touch, the basic mechanisms developed since 2004 to fight H5N1 prove quite useful to respond to the current priority: the prevention of A(H1N1).

This was stressed by the WHO Director-General, Margaret Chan, in her speech during the special meeting of the ASEAN+3 Health Ministers on the A(H1N1) influenza in Bangkok on May 8th. She recalled that the countries in the region had had the opportunity, more than in other areas of the world, to develop for the last five years monitoring systems and establish preparedness plans in the case of a transformation of the H5N1 virus. “The world is better prepared for an influenza pandemic than at any time in history, thanks, in part, to your vigilance and diligence,” she said before the Health Ministers of South-East Asia. “Years of alert and expectation mean that most countries now have preparedness plans.”

“I think we are much better off now than we would have been if this had happened, five years ago or ten years ago,” also opined Keiji Fukuda, Assistant Director-General for Health Security and Environment ad interim, during his weekly press briefing on A(H1N1) in Geneva, Switzerland. “[C]apacity building is really a very, very long-term activity. And it is not something that you can do in a few years. But on the other hand, this kind of activity has been going on for a long time. […] [T]here are now many more laboratories in the world that can diagnose influenza viruses. There has been a lot of experience over the last few years in terms of pandemic preparedness planning and this has been a huge help, both in the developing world as well as in the developed world,” he stated.

In the last few years, Cambodia has indeed significantly reinforced its health capacities, in particular regarding diagnosis and communication. The Pasteur Institute in Phnom Penh, the national referral centre, is today able to carry out tests to identify the H1N1 virus, while thanks to an extended network, from villages to provincial health centres, it is possible to signal suspect cases to the central level and act more rapidly.

Campaigns of prevention of H5N1, through posters, radio announcements and television clips – some of which deliver a more general message on basic hygiene measures (washing one’s hands, not spitting…) –, also contributed to pave the way.

A coexistence with unknown effects
However, if the presence of H5N1 allowed Cambodia to become equipped with the necessary tools in the case of a pandemic, the Kingdom would have gladly done without the threat that the avian influenza still represents. The health authorities now fear being faced with, not only one, but two viruses with unpredictable evolutions, as the first has not disappeared from the Cambodian countryside nor revealed all its secrets, as testified by a study conducted in Cambodia in 2008 and recently published, which reveals that several individuals carrying the H5N1 virus did not necessarily present its symptoms.

Another unknown: “We have no idea how H5N1 will behave under the pressure of a [H1N1] pandemic,” Margaret Chan worried on May 8th, calling the ASEAN countries as well as China, Japan and South Korea not to “drop the ball on monitoring H5N1.” One of the major fears expressed until then is to see the avian influenza virus, currently transmissible between animals or from animals to humans, evolve towards a form that is contagious from human to human, like H1N1.

“We have no specific information [indicating that such a transformation is at work], but we always pay a lot of attention to it,” Sok Touch confirms. “Today, we focus on the prevention of H1N1, but H5N1 remains an issue for us. We therefore approach the two issues on the same level.”

Cambodian authorities are currently trying first to avoid the entry of the latest virus on their territory. This was clear when two weeks ago, they launched an appeal to find three South Korean tourists, signalled by the Embassy of Korea in Cambodia, that had been in contact during a connection flight with a infected person. After these three individuals, who tested negative, it was the turn of a Canadian national to be targeted by a similar call, launched on June 3rd according to English-language daily Phnom Penh Post. A few days earlier, tests carried out on an 8-year-old girl, in transit in Taiwan while she was scheduled to travel to Cambodia from Canada, revealed that she was carrying the virus and therefore likely to have infected passengers in her vicinity and since scattered in the region. The fact that Cambodia is not an international flight hub and that American and European travellers must pass through various points of control still allows to protect temporarily the country. Until when?
Posted by CAAI News Media at 7:52 am

I was worried abou the spread of H1N1 germs, so I tried this great program with my kids called Germy Wormy Germ Smart. It teaches proper handwashing techniques, how germs spread and how to NOT spread germs. It was so much fun and really amazing how quickly my kids learned healthier hygiene habits!