Cambodia remains free of the worst of child labor but struggles with political processes and implementing the rule of law, parliamentarians say.

In a series of interviews with VOA Khmer in Washington, visiting National Assembly lawmakers discussed issues related to Cambodia, including labor, democracy and human rights.

The US is a major destination for garments manufactured in Cambodia, and donor countries have been working for years to improve elections and the judicial system.

The lawmakers were on a tour of Washington sponsored by the National Democratic Institute.

Ho Naun, chairman of the National Assembly’s committee on social work and labor, said that Cambodia has fully participated in the ILO convention 182 concerning prohibition and immediate action for the elimination of the worst forms of child labor.

Her committee works closely with the Ministry of Social Affairs and Labor to thwart the exploitation of children, she said, traveling where there were allegations of coercion of children in hazardous environments, such as rubber plantations and border markets.

“Everywhere there is a strict restriction not to allow children to engage in the worst forms of labor,” said Ho Naun, a member of the Cambodian People’s Party. 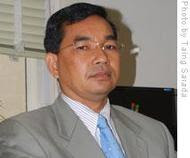 The National Election Committee fails to monitor resources used by the ruling party in election campaigns, which subsequently led to vote-buying, he said. And as for access to both private and state media, the opposition party is usually last.

“This is an imbalance for all political parties competing in elections,” Kuoy Bunroeun said, adding that the NEC was not functioning properly.

Cambodia still suffers from serious human rights violation and respect for the rights is only in the law book, according to an opposition lawmaker Mao Monyvann.

“This relates to the culture of impunity, where no alleged killer has ever been brought to trial,” Mao Monyvann said.

Cambodia has adopted a number of important laws that have enabled the country’s fast integration into the region, CPP lawmaker Nin Saphon said.

“So far there has been a lot of economic growth, and the National Assembly has passed crucial laws to help this growth and meet the legal needs of our people,” said Nin Saphon, who is also the chairwoman of the National Assenbly’s committee overseeing issues ranging from industry, mines, energy, commerce and transport.
Posted by CAAI News Media at 8:12 am