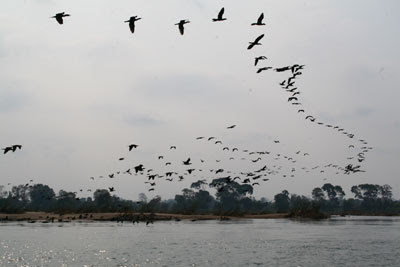 ELEVEN large-scale hydropower dams proposed for the Mekong River's lower mainstream will threaten regional food security and the livelihoods of millions of people, including thousands inside Cambodia, according a regional anti-dam coalition.

As part of a new campaign to be launched in Bangkok today, representatives from the Save the Mekong coalition, which includes NGOs, community groups and citizens, are to present Thailand's Prime Minister Abhisit Vejjajiva with a petition signed by 15,000 people calling for the halt of controversial dam developments.

The signatures were collected on postcards distributed by the group, many of which were returned with personal messages.

"What we're collecting is a diversity of opinions about what the river means to different people. Everyone has a lot of different perspectives," said Carl Middleton, Mekong program coordinator of International Rivers, a US-based advocacy group involved with the coalition.

"What everyone agrees on is that the Mekong is a valuable and shared resource that's worth protecting."
The petition will also be delivered to Prime Minister Hun Sen and to the leaders of Vietnam and Laos.

Vital arteries
Of the 11 proposed projects highlighted by Save the Mekong, just two are in Cambodia. But the country, heavily reliant on the freshwater fisheries of the Mekong and Tonle Sap, could also be vulnerable to the nine developments planned in Laos.

At a workshop Tuesday, environmental scientists and government officials said the 240- to 360-megawatt Don Sahong dam, to be situated in Laos's Champassak province, could have particularly serious effects downstream in Cambodia.

"I think the main concern of Mekong mainstream dams in relation to Cambodia is related to changes to the Mekong and Tonle Sap, especially when looking at fisheries production," Premrudee Daoroung, co-director of the Bangkok-based Towards Ecological Recovery and Regional Alliance, said by email.

She added that 70 percent of the fish catches on the Tonle Sap Lake use the Mekong as a migration channel, which is likely to be blocked by dam developments, including Don Sahong.

"My own opinion is that we need development, but we have to be careful about building dams along the Mekong River," he said, adding that the government had requested Vientiane forward on technical studies of the Don Sahong dam.

"We are waiting for the official notification from the Lao side ... in order to proceed with the negotiations and consultations."
Ultimately, Middleton said that such developments are risky, since the replacement value for lost fisheries stocks, which reach remote communities inaccessible to development workers, would be "unimaginable".

"This is a food source that spreads itself laterally through the whole region, and reaches the most remote communities," he said. "It's not a matter of being against the dams; it's about being in favour of the river and ... what the Mekong provides to the region."
Posted by CAAI News Media at 11:16 pm