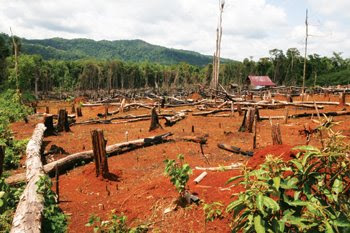 Photo by: TRACEY SHELTON
This forest on the border of Virachey National Park has just been cleared in this file photo taken earlier this year.

RECENT government claims that Cambodia is nearing its Millennium Development Goal of maintaining 60 percent of forest coverage by 2010 have been dismissed by environmental groups concerned over uncontrolled exploitation of the precious resource.

According to the Ministry of Agriculture's annual report released in April, more than 6 million trees were planted in Cambodia between 2004 and 2008, and Forestry Administration Director Ty Sokhun said that number is set to increase.

"We will grow and distribute 10 million trees to people throughout the country ... and encourage tree planting on 10,000 hectares of land," he told the Post in April.

UK-based NGO Global Witness, a frequent critic of the the Cambodian government over its environmental record, hotly contests the claim.

"Investigative work by Global Witness over the last decade has revealed widespread illegal exploitation of natural resources in Cambodia and a worrying lack of transparency at the highest levels," Global Witness campaigner Eleanor Nichol said in an email.

In 2007, Global Witness published a report - "Cambodia's Family Tree" - that exposed top-level corruption in resource harvesting and was subsequently banned in Cambodia.

It alleged that Cambodia's logging industry is heavily intertwined with the government via family and other personal connections and recommended that Cambodia's judicial authorities investigate the activities of Ty Sokhun and Chan Sarun, minister of agriculture, forestry and fisheries. "Cambodia's most powerful logging syndicate is led by relatives of Prime Minister Hun Sen and other senior officials," the report said.

A recent report by the UN Food and Agricultural Organisation also highlights the gap between government claims and the reality in the country's forests. According to the report, Cambodia's primary tropical forest coverage fell 29 percent between 2000 and 2005 from 456,000 to 322,000 hectares. In 1990, Cambodia had 766,000 hectares of primary forest, the report said.

Global Witness said the real losses may be higher, as artificial plantations may sometimes be counted as natural forests in surveys. "Plantations are not natural and have few if any of the ecosystem benefits provided by natural forests," Nichol said.

Hit from both ends
But not all of Cambodia's deforestation is driven by powerful Cambodians, said Mathieu Van Rijn, the manager of the forestry unit at GERES, a French environmental NGO.

Part of the problem was rural farmers who make and sell charcoal in order to supplement their incomes during the dry season, he said. "You have to think about people who have almost no income during a certain period of time [each] year," he said, adding that GERES was working in rural areas to encourage sustainable charcoal production.

"You try to lower demand, and on the other side you try to supply what is needed in the new situation," Van Rijn said.

As GERES helps Cambodians to reduce their consumption of wood, Global Witness (which has been barred from Cambodia since 2005) continues to maintain that the greatest threat to Cambodian forests lies in government sanctioned, illegal logging schemes and other illegal land concessions.

But according to its February report "Country For Sale", the problem of corruption in allocating natural resource concessions isn't limited to timber. "The same political elite who squandered the country's timber resources are now responsible for managing its mineral and petroleum wealth," the report said.

"Like high-value timber, these resources are a one-off opportunity. Once they are gone, they are gone forever."

At least six out of 23 protected areas in Cambodia had some form of mining activity as of February 2009, Global Witness said. One, Mondulkiri province, has had 282,700 hectares, or 21 percent its protected area, allocated to mining concessions.

The Cambodian embassy in the UK issued a press release in response to the report accusing Global Witness of "pursuing a malicious campaign to try and discredit the country and its leaders" and insisted that the government was handling its resources responsibly.

"The Government is working hard to establish a sound and comprehensive framework governing the extractive industries," it said. "These will reflect best practice and be based on the principles of transparency and accountability."

Given the government's track record, Nichol said action needed to be taken by donor governments. "If Cambodia's donors want the country's natural resources to be managed in a way which benefits the Cambodian people, then they must confront high-level corruption which underpins the sector," Nichol's said.

"At a minimum, they must link all non-humanitarian aid to reforms that will make the government more accountable to the country's citizens. They can start by insisting that a credible anti-corruption law - which the government has been stalling for over a decade now - is passed immediately."
Posted by CAAI News Media at 10:11 pm