Talking about a green future 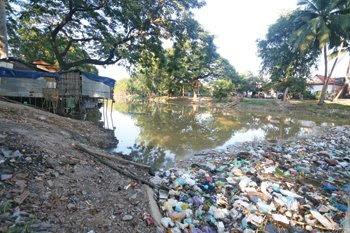 Photo by: TRACEY SHELTON
Environment week aims to encourage local Cambodians to look after the environment, not trash it like this river in Siem Reap.

The week is to feature film screenings at the Institute of Technology, the French Cultural Centre (CCF), Meta House, a display at Wat Phnom and a three-day Eco-Festival at the park east of Wat Botum running from Friday to Tuesday.

The events at Wat Botum park are the centerpiece of Environment Week. Lasting for three days, it will feature a tent complete with the displays of NGOs that deal with the environment.

"They can show the general public what they are doing," explained Nivollet. "People can walk around and have a look and discuss with the organisers."

The festival will feature a stage where quizzes, role-plays and music acts will take place. "There are lots of songs going on from student groups," explained filmmaker and photographer Allan Michaud, who is organising the eco-festival. Additionally, there will be films shown each night from 6pm to 9:30pm.

Local emphasis
According to Michaud, environmental awareness is low in Cambodia. "I think most of the problem in this country is that it just needs people to be aware. Be aware of their own personal problems and issues that they're bringing up."

Events such as Environment Week are intended to change these attitudes. "The obvious thing is to raise awareness and try to educate people, rather than have Khmers rely on donors to come in and NGOs to come in to look after them and babysit them. They need to be the ones looking at their environment and trying to take care of it."

Michaud hopes to get Cambodia's urban population interested in environmental issues in particular. "My personal aim with doing the big event in Wat Botum park is that we need to target the Phnom Penh audience. They're the ones who actually have some power in the country," he said.

"We have all the rural people understanding about their local problems, but if you can get the urban people to understand, particularly the students ... they can take the steps in the future."

Building on success
Environment Week originated in 2007 when the French Cultural Centre featured a three-day film festival featuring movies dealing with environmental issues. "It was quite a small event, but it was very successful," Michaud said.

Nivollet said the event was then expanded the following year by participants who wanted to do "something bigger" on the environment. "We started by just meeting together and thinking what we could do bigger than all these screenings, and we were thinking of something to reach as many people as possible," she said.

With the French embassy taking the lead initiative, the film festival was expanded last September into the first Environment Week with the collaboration of GERES and AFD.

"There were a lot of seminars and discussions which aimed at specifically targeted groups of people," said Michaud, adding that this year's event aimed to be much more public.

"It will be a success only if the participants want it to be a success."
Posted by CAAI News Media at 10:29 pm

Hello. I am posting on this blog because I am trying to get the word out about our organization.

Honestly, we need help. The entities that control this world do not want us to succeed in exposing their plans.

We need to start coming together as a nation and change the current "regime" through peaceful political means.

Also, please visit our band webpage and hear what our music is all about.