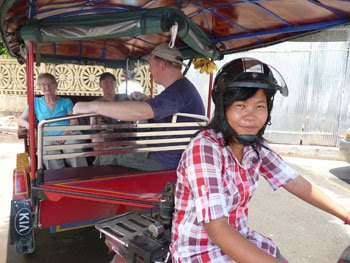 Her accounting degree took a back seat to driving a tuk-tuk, but won’t prevent this enterprising Cambodian woman from reaching her financial destination

With the arrival of her tuk-tuk, Bo Phadouch (nicknamed "Sky") has become one of Phnom Penh's first female tuk-tuk drivers, joining the growing number of Cambodian women who are choosing careers and independence over living at home to look after the family.

Unlike many of her male colleagues, Sky has a degree. With only a fraction of the Cambodian population attending university, Sky sticks out like a dainty sore thumb, abandoning her hopes of a high-flying career as an accountant to set up her own, more down-to-earth business.

Many might regard her aspiration to drive a tuk-tuk as somewhat lowly, but Sky has a forward-thinking business plan.

After spending four years running a travel service for a hotel on the lakeside, Sky has run her own stall in central Phnom Penh for the past five months.

Her "travel service" offers domestic bus and boat tickets as well as visas and tickets to more far-flung international destinations.
Having organised tuk-tuk "tours" for tourists, she decided it would be profitable to have her own form of transport.

"I have lots of friends from other countries who often come to Phnom Penh," Sky says. "If they want to visit somewhere, I usually organise tuk-tuks to take them, and so I decided I could make more money by driving them myself."

In an aggressive industry where drivers rely on persuasive hassling to attract customers, being female could have its disadvantages, particularly in a country so patriarchal that many people believe men have capabilities superior to women's.

Consequently, it can be easy to dismiss knowledge proffered by females when it comes to the "hotspots" of Phnom Penh.

With petty crime increasing, and tuk-tuks making vulnerable targets for bag snatchers, a male driver can also be seen as a protective buffer to potential muggers (unless he's in on the scam, too).

Though Sky admits that facing these perils comes with the job, she remains unfazed and is determined to prove herself against the odds.
"I don't mind taking people anywhere in Phnom Penh," she says. "I am not afraid; I am a brave person."

Of more concern to Sky is proving herself as a businesswoman in a society that by tradition believes that women should carry out the duties of housewives.

"A lot of women just want to get married and stay at home, but I am not looking for that. I need to raise money to support my sister, who is studying at university," Sky says.

Yet tuk-tuk driving is not a cheap enterprise. Sky has spent US$1,200 on her tuk-tuk and has had to find support from a willing donor, which came in the form of Owen Holcombe, an Australian visitor to Cambodia.

Profitable future
Holcombe lent Sky some of the money to purchase the tuk-tuk after he was inspired by her spirit and ambition.

"I met Sky when I was in Phnom Penh in March this year," Holcombe said.
"I always exchanged my currency with her because she gave a better rate than the banks.

"I had quite a few conversations with her at this time, and came to the fact the she was trying hard to make a decent living. After I learnt of her ambition to buy a tuk-tuk, I decided that I would help Sky to achieve her goal. I hope that Sky's story will give other Khmer women hope that they can better their position in life."

Sky said she was looking forward to a profitable future.
"I hope to have the money to one day buy a car - and maybe even a house," she says.

As Cambodian society gradually changes to starts the process of equalising the gender roles, hopefully women such as Sky will become the norm rather than the exception.
Posted by CAAI News Media at 9:57 pm