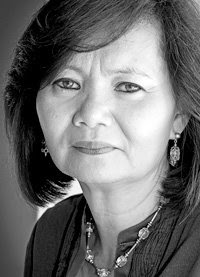 http://socialwelfare.berkeley.edu/
While working with Cambodian refugees in San Francisco as part of her MSW degree in the early 1980s, Mu Sochua never imagined herself a key political figure in the country of her birth. But now the activist turned politician is in the midst of a political standoff with Cambodian Prime Minister Hun Sen in a case that has attracted the attention of Human Rights Watch and the UN High Commission on Human Rights.

Sochua (pronounced Soc-Hua) fled from the growing violence in Cambodia in 1973 when her parents put her and her sister on a plane headed for France. She then came to the U.S. to attend San Francisco State, and enrolled in the MSW program at Berkeley in 1979. As a student she did field work working with the Cambodian refugee community – first with Alameda County Health Care Services, later with the Cambodian Project at the YMCA.

“It is a very Cambodian way of thinking not to be egotistic,” Ms. Mu told the SF Chronicle in an article about Cambodian refugees in 1979. “Once you are safe, you have to think of the people who suffer…It is a common feeling that we all share.”

Sochua intended to use her newly learned social work values to help Cambodians, and in 1989 she returned home. With her social work background she founded Khemara, an NGO dedicated to fighting for women’s rights, and later became the nation’s first female Minister of Women’s Affairs in 1998. After witnessing government corruption, she joined the opposition party, and in 2002 Sochua helped organize 25,000 women to run for election throughout the country, with over 900 women elected. Today she serves as an MP with the Sam Rainsy Party in the National Assembly.

In a series of events that began last year, Mu Sochua took a stand against Prime Minister Sen, a man who has held power in Cambodia since the overthrow of the Khmer Rouge in 1979. Sochua sued the Prime Minister for defamation after he made remark in a televised speech given in her district. In retaliation, Sen countersued, claiming MP Mu and her lawyer, Kong Sam Onn, were in fact the ones responsible for defamation.

Mu Sochua’s case against the Prime Minister was thrown out by the courts, while the Prime Minister’s counter suit against her and her lawyer has now gained momentum. A legislative vote stripped Sochua of her parliamentary immunity, a right, Hun Sen recently told a gathering, Sochua might never regain. “Lifting is possible, and restoring is – in many cases – impossible,” Sen is reported saying in the Phenom Phen Post. Sen also warned NGOs and foreign governments not to meddle in Cambodia’s affairs, saying that NGOs talking “nonsense” would also be brought to trial.

“The strong warning against foreign involvement by the Prime Minister, sounds more like Burma or Iran to me – a dictatorship,” says Sochua in a recent phone interview. “Cambodia receives over $1 billion in foreign aid each year. But where is the monitoring? Where are the reforms that are supposed to be part of receiving aid?”

The Cambodian Government is increasingly using the courts to silence opposition leaders, journalists and human rights groups, says a recent Asian Human Rights Commission report, citing six similar cases currently filed in the Cambodian courts. In 2008 Cambodia was ranked among the nations with the highest corruption in the world according to Transparency International; USAID stated in a 2004 report that corruption in Cambodia has “reached “pandemic” proportions.” The case of Sochua’s lawyer, Onn, also has international implications. Over the past four years the American Bar Association (ABA) has been working closely with the Cambodian legal system to promote democratic ideals and receives USAID funding for the program. Onn’s case brings up questions of how and why money is being spent for legal training in Cambodia. Sochua hopes the ABA will be vocal in speaking out in the case of her lawyer. On June 19th he was found guilty of violating Bar Association rules and could be disbarred for his involvement in her case.

Mu Sochua has been in touch with the School of Social Welfare throughout the months of her legal ordeal and requests interested parties send letters to the Cambodian National Assembly and to the U.S. Ambassador to the Cambodia, Carol Rodley. Vital Voices (vitalvoices.org) will also be helping with Sochua’s case and will keep updates on their web site. She also plans to visit UC Berkeley in September to speak about politics in Cambodia and the ways in which social work values inform her work as a politician.

Mu Sochua anticipates the defamation trial against her is scheduled to begin July 24th. If found guilty, Sochua faces imprisonment, but says that she will appeal the decision to the highest court “to put the Cambodian Judicial System on trial.”
Posted by CAAI News Media at 10:48 pm