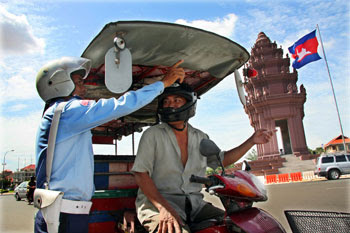 ONE week after Phnom Penh Municipality issued a statement announcing its plan to ban tuk-tuks and motorbike-pulled trailers from Norodom Boulevard, police officials on Wednesday began informing drivers about the ban, prompting concern from some who said they were being unfairly targeted.

Luos Seyha, director of the Cambodian Association for Informal Economy Development, which represents tuk-tuk drivers, said he supported the July 23 City Hall statement, but questioned why the ban was not also being applied to larger vehicles.

"We support City Hall's idea because it is to promote safety and public order in the city," he said.

"But not only tuk-tuks cause disorder. There are other kinds of big vehicles that cause such problems, too."

Prak Touch, a 45-year-old tuk-tuk driver, said Wednesday that police had stopped him that morning on Norodom Boulevard and instructed him that he would soon be banned from the road.

"They are not fining us because they have only started to inform drivers today," he said. "They say we are anarchic and cause disorder in the city.
What about other large vehicles?"

Heng Chantheary, chief of Phnom Penh's Municipal Traffic Police, said Wednesday that it was important for drivers to understand that police were simply doing what they had been told to do.

"When we inform tuk-tuk drivers of the ban, we also give them a copy of City Hall's statement to show them that we're not just banning them, but following orders," he said.

Phnom Penh Governor Kep Chuktema said Traffic Police would not start implementing the ban until police had fully informed drivers. He said some other large vehicles would also be affected by the ban.

"On Norodom Boulevard, we have confiscated many big vehicles travelling along the road. For tuk-tuks, we have educated them a lot, but never confiscated them. Do tuk-tuks have licences? They are too anarchic. So we must have this policy," he said.
Posted by CAAI News Media at 10:41 pm