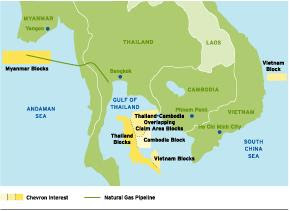 http://enews.mcot.net/
BANGKOK, July 30 (TNA) - Thailand's Ministry of Foreign Affairs on Thursday said Cambodia's concession granted to a French company to explore petroleum in the disputed maritime area will not affect Thailand's rights over the areas.

"Any concession granted by the Cambodian government would not affect the rights of Thailand," Mr Vimol said, "as both countries agreed in 1975 that any concessionaire would not be allowed to explore or develop petroleum resources in the disputed maritime zone unless Thailand and Cambodia successfully resolve the dispute."

Director-General Kurujit Nakhonthap of Thailand's Department of Mineral Fuels said the two governments must negotiate on how to deal with the 26,000 square kilometre overlapping maritime area.

Mr Kurujit said the Thai government once granted exploration licences to Chevron and PTT Exploration and Production in 1971, but four years later the licences were suspended as the dispute has yet been settled.

Regarding the concession given to Total, Mr Kurujit said, the rights to explore petroluem will be possible only when the two countries reach an agreement over the area first.

They cited the World Bank and International Monetary Fund studies which earlier estimated that there are about 2 billion barrels of oil reserves, and more than 10 trillion cubic metres of natural gas reserves in the disputed area.

"If the government remains indifference, we will file a complaint to the Office of the National Anti-Corruption Commission charging that government for negligence of duty for its failure to protect national sovereignty," Adm Bannavit said.

He said his group urged the Thai government to protest to Cambodia to make it clear that Thailand opposes its neighbour's move. (TNA)
Posted by CAAI News Media at 5:51 am