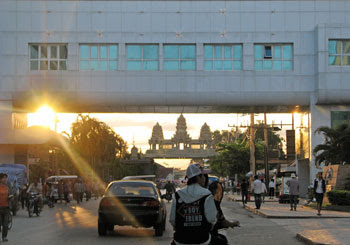 Photo by: Holly Pham
Vehicles cross the border between Cambodia and Thailand at Poipet. The Ministry of Economy and Finance has instructed the Kingdom’s seven insurers to pool together to insure vehicles at the border.

THE Ministry of Economy and Finance has instructed the Kingdom's seven insurance companies to contribute to a pooled insurance scheme that will cover vehicles crossing Cambodia's borders.

The government issued a directive establishing cross-border transport insurance in March this year.

In Meatra, the ministry's head of insurance in the finance industry department, told a tourism conference Wednesday that the pooling scheme is necessary because no single insurer is willing to take on the expense and risk of providing insurance.

"Each company is reluctant to sell insurance at border crossings because it will cost a lot to set up ... and they are worried there will be no profit because of the small number of vehicles crossing," he said.

The ministry instructed the General Insurance Association of Cambodia, an industry body, to set up a joint pool with the seven firms contributing.
"If [the pool] loses, they all lose, and if it profits, then they all profit," In Meatra said. "The agreement to establish the pool will be signed in early August."

He said the scheme would be operational by early 2010, once negotiations with the country's neighbours are completed.

"The insurance laws of Vietnam, Thailand and Laos are different from ours - their firms don't sell third-party liability insurance, only insurance for individuals and passengers," he explained. "So if a Cambodian vehicle crashes [abroad], the passengers can leave, but the vehicle will be impounded."

Chan Dara, deputy director-general of the transport department at the Ministry of Public Works and Transport, said Wednesday that Cambodia has signed cross-border agreements with its three neighbours.

But vehicles can currently cross legally only between Cambodia and Vietnam.
"A fixed number of 150 vehicles from each country are permitted to cross the border every day," Chan Dara said.

Cambodia agreed with Laos in April that 40 vehicles could cross daily, but Chan Dara said that has not started due to implementation problems on the Laotian side.

"As for Thailand, there is a deal, but it's not been implemented since we have difficulties contacting the Thai side," he said.

Duong Vibol, managing director of insurer Caminco, applauded the idea of a pool. But he said discussions have not taken place to determine the capital injection required from each firm.

Youk Chamroeunrith, general manager at Forte Insurance, told the Post that his firm had not been interested in undertaking the role on its own.

"We weren't worried about the losses because there are many vehicles crossing the Vietnamese border," he said. "But there would have been too many obstacles for one company. It doesn't need much capital, but the problems lie with logistics: IT, electricity, water and the site itself."
Posted by CAAI News Media at 10:51 pm