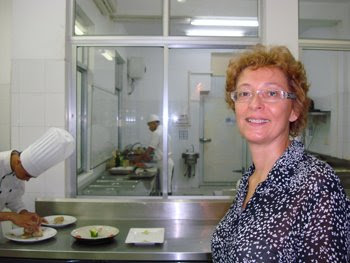 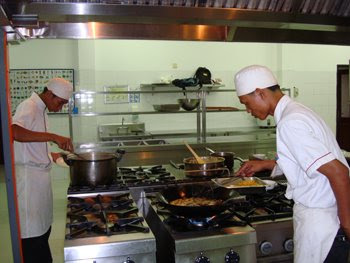 Photo by: Peter Olszewski
Chefs in training, above, at the Paul Dubrule hospitality school. At right, Director Beatrice Baranger in the school’s training kitchen. Baranger’s departure from the school later this year coincides with an agressive expansion plan that includes teacher training programs, new classrooms and a 300-capacity amphitheatre.

PAUL Dubrule's hospitality school, which has provided cooking and language training to over 1,000 Cambodians since 2002, is set to double its capacity for students by 2012, school officials say, adding that the three-year expansion plan was agreed on by the school and the government in February and will involve teacher training and the construction of 10 new classrooms and a 300-seat amphitheatre.

Ecole d'Hotellerie et de Tourisme Paul Dubrule takes in 200 students a year, many of whom receive support from a scholarship fund. The school provides one- and two-year programmes in restaurant service, wine and bar, cooking, pastry and bakery, front office and housekeeping, and tourism, as well as short courses geared towards small hotels and guesthouses, or locally run restaurants.

All programmes include computer classes and language training in French and English. The school boasts a 91 percent employment rate in the hospitality and tourism industries for its graduates, and its aim is to contribute to the sustainable development of tourism in Cambodia.

Student placement numbers have fluctuated over the last several years, but the trend is decidedly upward.

Some 116 students were placed in hospitality jobs in 2002-03. Between 2004 and 2005, placement dipped to 90 and 82, respectively, but picked up in subsequent years, with 160 students from the 2008 graduating class moving into hospitality employment.

The school opened its 2008-2009 academic year last October with 249 students, who are set to graduate on July 24 in a ceremony that is expected to attract VIPs from the tourism industry and the government. The school also plans to host a Career Fair on July 13.

Change of directors
But this year's 200-plus graduates aren't the only people leaving the school. Director Beatrice Baranger has also announced she intends to move on.

"I have been here for five years," Beatrice said. "In that time, we have transferred many of the teaching posts from expats to newly trained Khmers. Apart from the language teachers, I'm the only expat left."

She credits the high standard of the school's facilities to the "will of Paul Dubrule, who is very demanding at times and insisted that we have an internationally standardised hospitality school".

Taking the reigns from Baranger is Gerald Hougardy, general manager of Hotel Novotel Bangkok, which is owned by the French Accor Group.
Hougardy has also worked in hotels in Algeria and France.

The school was founded in April 2002 by a collaboration involving Paul Dubrule, chairman and founder of the leading multinational hotel group Accor Group; the mayor of Fontainebleu, France; and the Cambodian government. This followed a visit by the hotel tycoon to Siem Reap earlier in 2002 - Dubrule, then 68 years old, undertook an eight-month bicycle ride from his home in Fontainebleau to Siem Reap, a journey that spanned 15,000 kilometres and included a three-month side excursion through Tibet.

Dubrule personally donated US$1.2 million to get the school up and running, and he officially inaugurated the school on October 24, 2002.

Baranger said the Accor Group has been fundraising for the school for two years, and just two weeks ago Hougardy held a Paul Dubrule charity fundraiser at the Novotel that netted 400,000 baht (US$11,730). This year, the school is also receiving four Australian hospitality workers, who will train students and prepare a VIP dinner at Bayon temple in December.

Don Hancey, an Australian donor to the school, is helping organise the dinner and has promised it will use all Australian products. "There will be prawns, scallops, western rock lobster, lamb, Aussie beef, and a selection of Australian wines." Hancey said that Australian food is gaining in popularity in Siem Reap hotels, a trend he attributes to the expat community and the calibre of the food. "Australian beef is pretty damn good," he said.

Global partnerships
The school has partnerships with several French professional institutions, including the Saint Quentin School for Hospitality and Tourism in Yvelines, the Santos Dumont School in Saint-Cloud, the Lenotre School, the Merieux Foundation and the Paul Bocuse Foundation as well as the Accor Group.

Going forward, the school hopes to expand its relationships with other French schools, as well as leading culinary institutions in Asia.

Just over 55 percent of the school's funding comes from donors, but the school also runs a revenue-accretive small four-room hotel on school grounds and two student-operated restaurants.

Le Jardin des Delices is in a tropical garden setting on school grounds, can cater for up to 150 people and is open for a set menu lunch Tuesday through Friday, plus certain evenings for special events and by private request. Le Cafe, next to the French Cultural centre in downtown Siem Reap, serves salads, pastries and coffee Monday through Saturday from 7:30am to 9pm.

Income from the hotel and restaurants, and other sales brings in 28 percent of the school's funds, while school fees earn another 17 percent.

A fund is also available to finance scholarships for disadvantaged youth, and after annual normal admission procedures, the school conducts a "social research inquiry" among the families of candidates seeking scholarships. A special committee then appoints the beneficiaries of the grants.
Posted by CAAI News Media at 11:00 pm