PHO24 due to expand 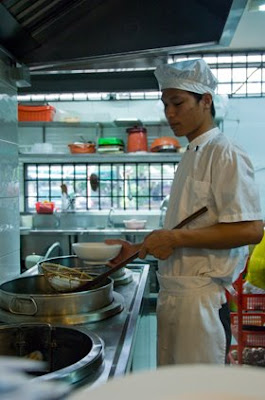 Photo by: Christopher Shay
A chef drains noodles Wednesday at a PHO24 branch at the Phnom Penh Centre off Sihanouk and Sothearos boulevards.

THE franchise owner operating the well-known Vietnamese noodle chain PHO24 said his firm aims to add two new outlets in Cambodia by the end of this year.

He and his Cambodian business partner paid US$200,000 for a 10-year master franchise contract from the parent company in Ho Chi Minh City, he said.

"My business partner and I frequently travelled to and from Vietnam and saw that people really liked PHO24 noodles," he said, explaining their decision to buy into the franchise. "The chain operates 60 outlets in Ho Chi Minh City alone."

2H Company, a Cambodian-Malaysian joint venture, opened its first outlet in late 2007. It now has two outlets in Phnom Penh and one in Bavet in Svay Rieng.

Ly Qui Trung, the founder and CEO of PHO24, told the Post by email on Wednesday that the plan for the Cambodian market is to have a total of 10 outlets after three more years, and 20 outlets seven years after that.

Ly Qui Trung said the brand would take time to establish itself within the Cambodian market.

"The first few years will be for testing and refining the menu, the design and the business concept. After that the brand will grow faster and stronger," he said. "At the moment the master franchisee opens [their] own PHO24 shops, but in the future [they] will sell sub-franchises too."

Tian Toh Seng said one reason for the brand's success is that it provides good value and good quality fast food.

"For example, we require people who sell us meat to show us the vet's licence, otherwise we won't buy from them," he said.
Tian Toh Seng said that prospective sub-franchisees would require a capital investment of between $30,000 to $40,000 to buy the franchise, rent the location, purchase material and train the workers.

Var Rath San, director of the intellectual property department at the Ministry of Commerce, said the brand was first registered here in 2005.

Aside from Cambodia and Vietnam, PHO24 also has outlets in Singapore, the Philippines, Indonesia, South Korea and Australia.
Posted by CAAI News Media at 10:28 pm