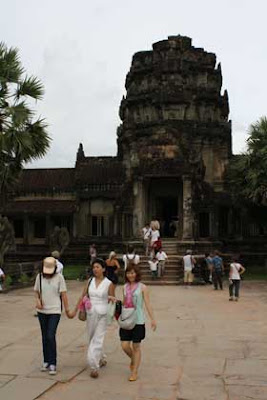 Photo by: Steve Finch
Tourists walk among the Angkor temples in Siem Reap, where the Sheraton had hoped to build a high-end hotel. A company representative said Wednesday that the project is now on hold.

After an earlier delay that would have seen the Four Points by Sheraton Angkor open January 1, 2011, the parent company now says the project is 'on hold'.

SIEM REAP
SHERATON'S much-vaunted entry into the Siem Reap market has now been put on hold, a company official said Wednesday, despite a notice on the parent company's Web site that still states the Four Points by Sheraton Angkor, Cambodia, will be opening on January 1, 2011.

The Web site of the parent company, Starwood Hotels & Resorts Worldwide Inc, also announces that group bookings are being accepted at the pre-opening office in Royal Orchid Sheraton Hotel & Towers in Bangkok.

But in a sudden move this week, after much speculation within the regional hotel industry, a Starwood official told the Post that plans for the Siem Reap hotel are now in doubt.

"We regret to inform you that the opening of this property is now on hold," said Narumon Uakaroonchaikul, Starwood's administrative assistant to the regional director of sales and marketing.

"We shall keep you informed if there is any further update," he added.

In May 2007, Starwood said it had signed "its first Four Points by Sheraton hotel in Cambodia and the Indochina region ... scheduled to open in 2009".

The opening date was later rescheduled to January 1, 2011, a company official said Wednesday.

Starwood's Narumon did not offer any reason for the most recent push-back, but added: "Starwood is now operating Le Meridien Angkor in Siem Reap."

Le Meridien was opened in late 2004, but the parent company was in financial jeopardy, and the property was acquired by Starwood Hotels & Resorts Worldwide in November 2005.

In June 2004, Hotel Asia Pacific Editor Steve Shellum reported that Le Meridien group was "in the process of being recapitalised, following the worst crisis in the history of the travel industry, which brought the company to its knees with debts of more than US$2 billion".

In December 2003, Lehman Brothers acquired the senior debt of the Le Meridien group from a syndicate of banks for about $1 billion.

Hotel Asia Pacific again reported in June 2004 that "Starwood Hotels & Resorts subsequently acquired a piece of the debt from Lehmans - but its investment is subject to completion of due diligence".
Posted by CAAI News Media at 9:49 pm