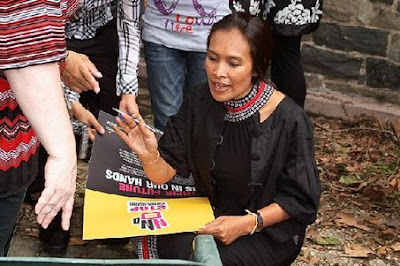 Submitted photograph
Somaly Mam, an advocate against sex trafficking and slavery, talks with supporters at a recent gathering. She was at Carousel Center Thursday at The Body Shop. That company The Body Shop has launched a fund-raiser for Somaly Mam and ECPAT (End Child Prostitution, Child Pornography and Trafficking of Children for Sexual Purposes). Somaly was a victim of child sex trafficking
http://www.syracuse.com
by Nina Wegner / The Post-Standard
Friday August 07, 2009

Somaly Mam, an international spokeswoman for ending child sex trafficking, paid a visit to the Carousel Center on this week to help promote an anti-trafficking campaign launched by The Body Shop.

More than 1.8 million children and young people are trafficked in the global sex trade each year, even within the United States, according to a 2002 report by the International Labor Organization.

Human trafficking is the globe's second largest organized crime, generating $9.5 billion a year, according to the U.S. State Department. However, sex trafficking remains an underexposed issue in America.


With the sale of several $10 body care products, The Body Shop will donate $6 to the organization End Child Prostitution, Child Pornography and Trafficking of Children for Sexual Purposes and the Somaly Mam Foundation.

"The Body Shop (campaign) has given us hope, because so many people (who are sold into sexual slavery) are so isolated, and alone, they feel nobody understands," said Mam. "It means a lot for us, it means a lot for the lives you save."

Mam, who was sold into sexual slavery as a child in Cambodia, was able to escape captivity and in 1996 started an advocacy group, AFESIP (an acronym in French for "Acting for Women in Distressing Situations").

Mam traveled from Cambodia to support the campaign's launch. In Syracuse, Mam greeted and thanked the staff of The Body Shop.

"Our late founder, Dame Anita Roddick, was dedicated to the issue of human trafficking. When she passed away in September 2007, we felt it was a fitting tribute to Anita to launch something as powerful as this," said Shelley Simmons, director of communications and values for The Body Shop.
Posted by CAAI News Media at 6:30 am

buy tramadol no prescription tramadol overdose how many - tramadol erowid