Help sought in war on drugs 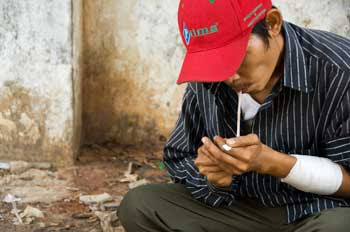 Traffickers have been using new routes to smuggle their drugs into cambodia.

Ke Kim Yan tells ASEAN officials at a meeting in Phnom Penh that the Kingdom needs support to meet the regional body’s goal of complete eradication by 2015.

DESPITE recent progress in the fight against illegal drugs, Cambodia needs help from the international community if it is to meet the regional goal of eradicating illegal drugs by 2015, the Kingdom’s drug tsar said Tuesday.

“Cambodia is currently facing attempts to use the country to manufacture drugs for exporting to outside markets,” said Ke Kim Yan, who chairs the country’s National Authority for Combating Drugs.

Recent trends have seen the Kingdom used as a site for large- and medium-scale narcotic production, Ke Kim Yan said, pointing to crackdowns on three major production and storage sites, including two in Phnom Penh, earlier this year.

“We would have fallen into grave danger if our law enforcement had not suppressed these manufacturing locations in time,” he said. “Hundreds of thousands of people inside and outside of Cambodia could have suffered.”

The government believes it still faces threats from drugs seeping in through northeastern borders, according to Cambodia’s report on its internal drug situation given to ASEAN members at this week’s ASOD conference.

Although heroin and methamphetamine are seen as the main drugs circulating in Cambodia, the country is also increasingly worried about a surging cocaine trade.

“The drug traffickers have been using new routes to smuggle their drugs into Cambodia and to export internationally,” Ke Kim Yan said.

Recent statistics, Ke Kim Yan said, suggest overall drug use has been on the downswing since 2005. Drug treatment in the Kingdom’s 14 private or state-owned treatment centres, he acknowledged, is another matter.

“The centres only isolate the addicts from drugs,” he said. “There is no model or standard guideline for treatment.”

Ke Kim Yan warned that Cambodia will need help if it is to become drug-free by 2015, a goal previously set by ASEAN member nations.

“Cambodia is in great need of technical experience and material assistance and support from … the international community,” he said.

Some observers, however, are sceptical that the government will reach its objectives. Previous crackdowns, said Him Yun, vice president of the Khmer Youth Association, have not produced sustained results, as youth drug use remains widespread.

In 2001, the United States dropped Cambodia from its annual list of “major illicit drug-producing or major drug-transit countries”, upgrading the Kingdom to a “country of concern”.


zapya for windows
zapya pc
zapya apk download
zapya free download
You can transfer 120 picture only in 60 seconds as it has 5MB/Second speed. So give it a try.