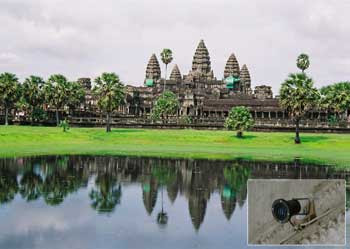 Modern lights (inset) installed at the Angkor temple complex (above) caused a stir when it was said that they might damage the ancient structures.

The exiled head of the Khmer Civilisation Foundation (KCF) has asked for a retrial of his July conviction on disinformation charges, his lawyer said Tuesday.

Moeung Sonn, who is currently in France, was tried in connection with comments he made in May suggesting that a light-installation project at Angkor Wat could damage the 11th-century temple. He was found guilty by Phnom Penh Municipal Court Judge Chhay Kong and sentenced to two years in prison, fined 7 million riels (US$1,680), and ordered to pay an additional 8 million riels in compensation to the Apsara Authority, the body that manages the temple complex.

Last week, Moeung Sonn requested that his lawyer, Sam Sokong of the Cambodian Defenders Project, write a letter to the Municipal Court urging them to re-examine the case.

“I wrote a draft today, and I will send a formal letter to Phnom Penh Municipal Court within the week asking that my client’s case be retried, as it has been two months since we appealed the conviction,” Sam Sokong said Tuesday.

Chhay Kong said that upon receiving Sam Sokong’s letter, he would fix a time for a retrial. He added, however, that the scheduling of this event should not be taken to mean that Moeung Sonn will be acquitted.

“A retrial doesn’t mean that [Moeung Sonn] has been exonerated, but only that his defence lawyer has appealed his conviction,” the judge said.

Sam Sokong said that though the procedure for retrial scheduling is not spelled out clearly in Cambodian law, retrials are an important element in the protection of defendants’ rights.

Speaking from France on Monday, Moeung Sonn said that he was seeking help from a variety of sources in an effort to overturn the verdict against him.

“I am now seeking intervention from UNESCO and other organisations from the international community, and I have already apologised to the Cambodian government,” he said. “I have requested that the Phnom Penh Municipal court lift the charges against me in order to pave the way for my return to my beloved country.”