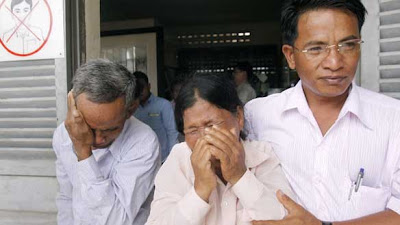 Cambodian farmer Penh Khen, centre, cries after a tour this week of a former Khmer Rouge prison, now turned into a genocide museum in Phnom Penh, the capital. (Heng Sinith/Associated Press)
http://www.cbc.ca
More former Khmer Rouge leaders could face charges before a United Nations-backed tribunal after the court agreed Wednesday that investigations can be opened into additional suspects.

The decision could put the tribunal on a collision course with Cambodian Prime Minister Hun Sen, who has repeatedly said prosecutions should be confined to the five suspects already charged and suggested that he would end UN participation in the trials if the number were expanded.

A long-awaited first trial against the Khmer Rouge's chief jailer opened in March for war crimes and crimes against humanity. A joint trial with four other senior officials, currently in detention, is expected in the next year or two.

The tribunal is seeking justice for the estimated 1.7 million people who died in Cambodia from execution, overwork, disease and malnutrition as a result of the communist regime's radical policies while in power from 1975-79.

Cambodia and the United Nations created the tribunal last year under an agreement they reached in 2003. It is an unprecedented hybrid that brings together domestic and foreign judges and prosecutors who operate under the Cambodian judicial system, which is often criticized as weak, corrupt and susceptible to political manipulation.

Lars Olsen, the tribunal's spokesman for legal issues, said Wednesday's announcement was a first step in a long process and does not necessarily mean more suspects will face trial.

"It is important to say this does not automatically mean there will be more prosecutions," Olsen said. "It means [the international prosecutor] is no longer barred by the disagreement with Cambodian colleagues."

The dispute was one of many that has delayed and complicated proceedings at the tribunal.

Critics allege that Hun Sen has sought to limit the tribunal's scope because other potential defendants are now his political allies. Hun Sen served as a Khmer Rouge officer and many of his major political allies are also former members of the group.
Posted by CAAI News Media at 10:28 pm