Student volunteers go around the globe 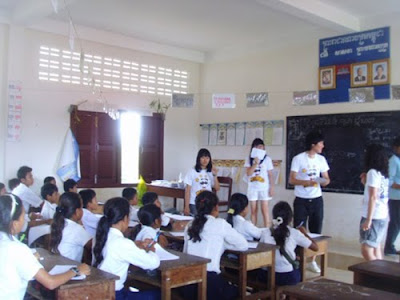 In a small schoolhouse, a group of Nepalese children were singing the olchangi (tadpole) song in Korean for the first time in their lives. Just a few hours ago, they had not even known the language existed. Now, their voices resounded with joy at the new sounds they were making. At the front of the classroom, the teacher was brimming with enthusiasm, ready to continue.

What may seem odd about this is that the teacher was a Korean high school student doing volunteer work.

“Although the weather, the food, the shelter and pretty much everything was unsatisfactory, I was happy that the children learned a lot with us,” said Cho Min, a high school senior who was part of a 15-member team that went to Nepal. “My volunteer group also had to build a house for a homeless Nepalese family,” Cho said. “We worked on that for a whole two weeks. At first, I was just tired and frustrated. However, as time passed, I think I got a glimpse of the true meaning of volunteer work. That’s why my teammates and I signed up in the first place, anyway.”

More and more high school students are traveling overseas for their volunteer assignments, according to Cho and other volunteers.

“I’ve gone on several service missions overseas, and I know many friends who have an interest in volunteer work. Although nobody wanted to go abroad before, it seems that everybody wants to do public service overseas these days and do something worthwhile for a change,” Cho said.

Korean high school students are required to complete 20 hours of community service every year for their graduation and college admission. Some find the task unnecessary. But more and more students are signing up to give their time overseas.

Lee Bo-hyung, a high school freshman, said that a lot of students want to do something that actually makes them feel good about themselves.

“To teach art, we made the necessary teaching materials by hand,” said Kim Hyun-ji, a high school junior. “We taught [the children] about Korea using maps, traditional fans and cultural brochures.”

Kim had signed up with Copion, a service organization, to work in the village of Svay Tour, Cambodia, where she went earlier this month.

“I stayed there for 11 days. The lodging facility was literally something out of the Discovery Channel, what with all the bugs and lizards in the sleeping quarters.” said Kim. “There were four teams, but some people had to stay behind in Korea, because so many signed up.”

Countries like Nepal, Cambodia and China welcome the increase in foreign teenage volunteers, who build houses and teach children in remote villages in developing countries.

This kind of community work is not a one-time thing, however. All the students interviewed said that they wanted to take part again, with most saying they planned to do so after graduating high school.

“Because I’ve had a personal experience with the needy, my sympathy for them has developed into empathy. That’s why I want to go help them again. I also want to encourage this kind of public service.” said Chang Ha-eun, a high school freshman who volunteered in Cambodia early last month.

*This series features articles written and reported by high school students participating in the JoongAng Daily’s summer internship program. All articles were written with the guidance of our staff reporters.

By Lee Doh-yun [enational@joongang.co.kr]
Posted by CAAI News Media at 7:13 am