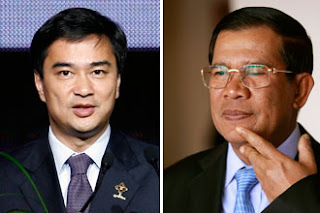 Thai Prime Minister Abhisit Vejjajiva (left) hit back by accusing Mr Hun Sen (right) of being a 'pawn' and urging him to work for unity between the two countries. -- PHOTOS: REUTERS, AP, AFP 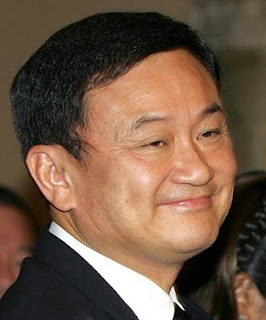 Cambodian premier Hun Sen on Friday offered Thaksin Shinawatra (above) a job as finance adviser if the ousted Thai leader seeks refuge with him, upping tensions with Thailand at an Asian summit.

Mr Hun Sen, the outspoken Cambodian premier, further riled the hosts of the annual meeting by comparing the plight of the ousted Thaksin to that of detained Myanmar democracy icon Aung San Suu Kyi.

Thai Prime Minister Abhisit Vejjajiva hit back by accusing Mr Hun Sen of being a 'pawn' and urging him to work for unity between the two countries, which have had a series of deadly border skirmishes in the past year.

'Thaksin can stay in Cambodia as a guest of Cambodia. He can also be my adviser on the economy,' Mr Hun Sen said as he arrived in the beach resort of Hua Hin for the Association of South-east Asian Nations (Asean) summit.

The Cambodian leader repeated an earlier invitation to Thaksin to stay in Cambodia and rejected Thai claims that Phnom Penh would have to extradite the tycoon. Thaksin was toppled in a 2006 coup and fled Thailand last year to avoid a jail term for corruption.

Ties between Cambodia and Thailand have been difficult since June 2008 amid an ongoing border conflict over land surrounding an 11th century temple. But relations have cooled further since Mr Hun Sen made his first invitation to Thaksin earlier this week. -- AFP

'OUR concern is for humanitarian reasons, it is friends helping friends.

The internal affairs of Thailand would be left for Thai people to resolve, I am not interfering,' said Mr Hun Sen.

'Millions of Thai people, the Red Shirts, support Thaksin. Why as a friend can't I support Thaksin? Without the 2006 coup these things would not have happened.'

Mr Hun Sen, a former Khmer Rouge commander known for his provocative remarks, added: 'Many people talk about Aung San Suu Kyi in Myanmar, why not talk about Thaksin? That cannot be referred to as interfering.'

Mr Abhisit rebuked his guest, telling reporters there was no comparison with the Myanmar opposition leader, whose house arrest was extended by 18 months in August to a chorus of international outrage.

'I am concerned that he is seriously misinformed. I think there is clearly a misunderstanding of the situation if he compares the situation as far as Thaksin is concerned and Aung San Suu Kyi,' he said.

'I don't know how many people share his view that Thaksin is like Aung San Suu Kyi. I doubt there are many, for fairly obvious reasons.'

The Oxford-educated Abhisit, who earlier in the day represented Thailand at a ceremony marking the creation of Asean's first ever commission on human rights, said the summit was an opportunity for regional unity.

'I don't want him to be a victim or a pawn for someone that undermines the interests of his country and the interests of the region. I am sure that when he is better informed he will change his mind.'