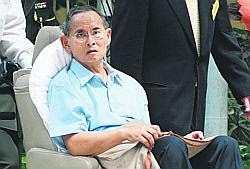 The comments add to mounting friction between the neighbouring countries that threatens to overshadow a summit of the 10-member Association of South East Nations (Asean) that began yesterday.

Thailand is seeking to extradite the former premier, who is living in self-imposed exile in Dubai, to serve a jail term for corruption.

'Thaksin can stay in Cambodia as the guest of Cambodia and also be my guest as my adviser on our economy,' Mr Hun Sen said in a rare appearance before international journalists, while attending the Asean summit in the Thai resort town of Hua Hin.

He likened Thaksin to pro-democracy icon and Nobel Peace Prize winner Aung San Suu Kyi, who has spent 14 of the past 20 years under house arrest or in jail in military-ruled Myanmar.

'People talk about Aung San Suu Kyi, why not talk about Thaksin?' said Mr Hun Sen, who described the former telecommunications tycoon on Wednesday as an 'eternal friend' who had a residence in Cambodia waiting for him.

Thai Prime Minister Abhisit Vejjajiva had tough words for Mr Hun Sen, calling him 'seriously misinformed' as the row threatened to overtake other issues at the Asean summit.

'I don't know how many people share his view that Thaksin is like Aung San Suu Kyi. I doubt there are many in the world, for obvious reasons,' Mr Abhisit told a news conference.

'I don't want him to be a victim or a pawn for someone who undermines the interests of this country,' he added. 'I'm sure when he's better informed, he'll change his mind.'

Before yesterday, the Thai government had sought to play down Mr Hun Sen's overtures to Thaksin, saying that it would try to extradite the former tycoon if he ever came to Cambodia.

Mr Hun Sen, however, said that his government would never agree to extraditing Thaksin.

The war of words underlined how Thaksin can still yield considerable influence over Thailand's affairs even from exile.

Six months ago, Thaksin also embarrassed the Thai government when hundreds of his red-shirted supporters broke through security barriers at an Asian summit, forcing some leaders to flee by helicopter and abruptly ending the meeting.

Mr Hun Sen caused a stir earlier this month when he ordered troops to shoot any Thai who crosses illegally into Cambodia, as nationalist tensions mounted over an 11th century temple the two countries have fought over for decades.

And Mr Hun Sen previously threatened to boycott the Hua Hin meeting altogether over the temple.

King Bhumibol Adulyadej, who is considered a moral authority and a unifying figure for Thailand, has been in hospital for more than month.

On Thursday, he appeared in public for the first time since he was hospitalised.

The 81-year-old king's appearance follows a pronouncement by the palace - which had been giving daily updates on his condition - that his health was 'stable'. Wearing a light-blue short-sleeved shirt, King Bhumibol was wheeled in an electric wheelchair into a closed-off area on the ground floor of the hospital in Bangkok to garland the statues of his late parents.

He looked alert and much the same as in previous public appearances. He raised his arm to greet the public as he was wheeled through the hospital corridor.

The Bureau of Royal Household said in a statement late on Wednesday that the king's condition was stable and he was 'physically stronger'. He will continue to take antibiotics, it said.

King Bhumibol checked into Bangkok's Siriraj Hospital on Sept 19 with fever, fatigue and lack of appetite.

Rumours about his health led to a short but sharp sell-off of shares on the Thai stocks last week. -- Reuters, AP