A Dance of Tragedy 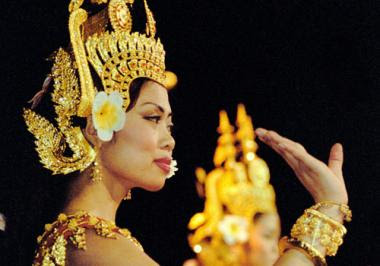 When the Khmer Rouge took control of Cambodia in the '70s, artists became targets. Many perished or fled the country in fear. Among those who fled were the creators of the Angkor Dance Troupe.

In 1986, two dance teachers and a handful of dancers (who learned the traditional dances in refugee camps in Thailand) formed the troupe in Lowell as part of an effort to revive the forgotten art and culture of a country torn apart by genocide. The troupe now includes nearly 100 dancers.

As part of UMass' celebration of Asian arts and culture, the distinguished troupe comes to Amherst to perform alongside the documentary film Monkey Dance. In this award-winning film, three Cambodian-American teenagers come of age living in the shadows of their parents' experiences under the Khmer Rouge. Traditional dance links the characters in the film and the performances, and the troupe highlights some of its favorite dances before the screening.