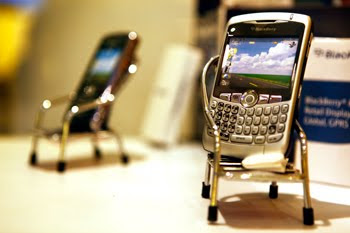 BlackBerries are shown on sale at a Hello store in Phnom Penh. Mobitel has announced it will launch RIM smartphone handsets, becoming the second operator in the Kingdom to do so.

MOBITEL said on Tuesday that it will launch BlackBerry service, becoming the second mobile-phone provider in the Kingdom to the offer the Research in Motion (RIM) handsets.

The country’s largest provider by users said it would begin selling the Storm and Bold handsets on three service plans, although the exact pricing and launch date were not confirmed.

Sales staffers at a Mobitel-branded store on Sothearos Boulevard were not able to say Monday when the firm’s BlackBerries would go on sale, adding that no pricing framework had been decided.

Mobitel said at the beginning of April that it was preparing to offer BlackBerries and had already entered agreements with RIM.

“Mobile connectivity is becoming more and more important to mobile users in Cambodia, and we’re very pleased to be working with RIM,” Mobitel CEO Jeffrey Noble said in Tuesday’s announcement.

Hello then launched the 3G Bold in July, announcing in September it would cease offering 2G Blackberries.

On October 26, Hello dropped the entry price of its BlackBerries from US$68 per month to $41 per month, and allowed existing BlackBerry owners to sign up to a Hello plan without having to purchase a handset.

“We have seen huge success from our Axiata sibling XL in Indonesia,” he said. “Currently there is no operator in the world that has offered BlackBerry prepaid except XL, our subsidiary in Indonesia, and [it is] hugely successful there.”

RIM increased its share of the worldwide mobile-phone market in the third quarter, according to research published by IDC last week.