Local photographer seeing the Kingdom in a new light 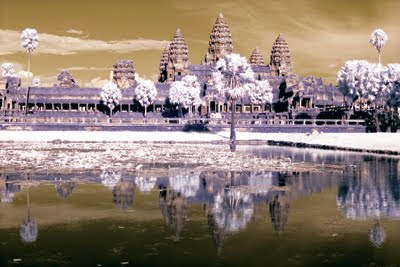 Angkor Wat has been photographed from every conceivable angle and light from sunup to sundown. It hosts millions of tourists a year, and you’d be hard-pressed to find a visitor who isn’t trying to capture its beauty through his own lens.

So snapping a truly unique picture of the temple seems like an impossibility.But it’s a challenge he thrives on.

Finding new ways of capturing Cambodia’s picturesque places is Moeun Nhean’s artistic passion, and his recent work – which uses a digital camera to record light waves that are invisible to the human eye – shows the Kingdom’s most recognisable locale from a different perspective.

In a photo of the entrance to the Bayon temple in Siem Riep, the statues lining the road look normal, but are shaded by bright white trees that appear to be covered with snow. In a photo of Angkor Wat, the temple looks purple, the sky looks green, and the trees reflect the same ghostly white. These images have not been digitally manipulated on a computer, but produced in-camera.

Although Moeun Nhean’s photos are taken with digital cameras, infrared photography, and the ethereal effect it creates, has been practised since the early 1900s.

In infrared photography, the film or sensor is made sensitive to infrared light – light which is invisible to the human eye. Red or almost opaque filters are then used to allow infrared light through while blocking some or all of the visible light.

The fluorescent look of foliage created with this process is called the “Wood effect”, after Robert W Wood, who pioneered infrared photography.

The effect results in plants and leaves reflecting infrared light in much the same way snow reflects white light.

With its psychedelic look, the popularity of the effect peaked in the 1960s, showing up on album covers of artists such as Jimi Hendrix and the Grateful Dead.

Meoun Nhean decided to try the technique in Cambodia using a digital camera after reading Western books on design.

“Those pictures look strange. The concept of the designers is strange, but they always keep originality of the item,” he said.

To nonplus his audience and differentiate himself from other shooters in the country, Mouen Nhean is constantly searching for new ways to take photos.

But the photographer has paid a high price for his resourceful tinkering. Since he began experimenting with the in-camera effect he has destroyed eight cameras. This is because if you really want to shoot infrared using a digital camera, the camera’s infrared blocking filter must be removed and replaced with a visible-light blocking filter, which can cause damage.

But for Mouen Nhean, it’s worth it.

“I don’t know if people like the photographs when they see them,” he said. “I just want them to look different.”

Meoun Nhean got his first camera in 1983 from a cousin who brought it back from the former Soviet Union, and he has been honing his skills ever since.

He received professional training in photojournalism from Indochina Media Memorial Foundation in Bangkok on a scholarship from the Ministry of Information.

After a stint as the general manager of The Cambodia Today newspaper, Mouen Nhean now puts out a magazine called the Cambodian Scene, where he publishes his photos and stories.

Although he has succumbed to the pressure to go digital in the newsroom, his preferred medium is film.

“I love film cameras because I have to think and be sure the picture will be clear before I shoot,” Mouen Nhean said.

“When we take photos with digital cameras, we can view pictures immediately, so it doesn’t surprise me like the film cameras.”