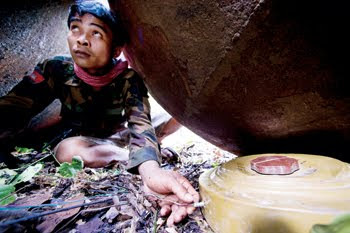 RCAF soldier Sean Prel inserts a charge into an anti-tank mine in order to destroy equipment used in the production of safrole, a precursor for the drug Ecstasy. A recent patrol destroyed 18 illegal factories in the Phnom Samkos Wildlife Sanctuary in Pursat province.

Raids, patrols squeezing the life out of Cambodia’s trade in so-called ‘Ecstasy oil’.

ANTI-DRUG officials say they are one step closer to eradicating illicit drug precursor production in the Cardamom Mountains following a recent patrol that led to the destruction of 18 illegal factories in the region.

The gruelling 10-day foot patrol, carried out by conservation groups in close cooperation with forest rangers from the armed services and Ministry of Environment, targeted jungle stills producing safrole oil, a precursor to the production of MDMA – more commonly known as Ecstasy.

“This latest enforcement action … has delivered a heavy blow to those criminal elements that seek to exploit and destroy Cambodia’s forests for personal gain,” said Tim Wood, an adviser for Flora and Fauna International (FFI) who took part in the patrol, in a statement Sunday.

Safrole-rich oil, which has legitimate uses in the chemical industry as a fragrance agent and in the manufacturing of insecticides, is distilled from the roots of trees belonging to the sassafras family, known in Khmer as m’reah prov phnom.

To produce the oil, operators feed the trees into mechanical shredders and boil down the wood chips to produce a thick, amber-coloured oil that is highly prized on regional drug markets but can have deleterious effects when leaked into the environment.

Thorn Kimhong, director of the Cardamom natural protected areas for the Ministry of Environment, said the 10-day patrol that ended Wednesday followed air surveys by anti-drug authorities that confirmed the presence of 25 safrole stills in the western Cardamoms.

“It is not easy to find them since they produce deep in the jungle, so we use helicopters to monitor from the air and GPS sending foot patrols into the jungle,” he said. 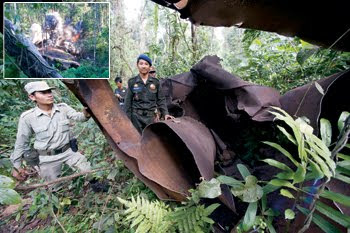 RCAF soldiers and forest rangers inspect the twisted remains of a steel cauldron used to distill safrole oil in the Cardamom Mountains, just minutes after destroying it with an anti-tank mine (inset).

THEY’re NOT INTERESTED IN SUSTAINABLE FORESTRY... THEY JUST WANT TO GO IN AND MAKE MONEY.


Experts say safrole production began in Cambodia around 2001, linking its growth to a drop-off in production in neighbouring Vietnam after Hanoi issued a ban on the local production of the substance in 1999.

Bunra Seng, country director of Conservation International, said Vietnamese drug syndicates learned of the presence of m’reah prov phnom trees during the Vietnamese military occupation in the 1980s, and when Vietnamese authorities cracked down on safrole production, drug cartels simply shifted their operations to remote areas of the Cardamoms.

“In each factory there has been one or two Vietnamese experts who build the tanks and run the system,” he said.

Thorn Kimhong confirmed the presence of Vietnamese “technicians” at the factory sites, saying the majority of Cambodia’s safrole is exported to Thailand and Vietnam, presumably for drug production in those countries.

It is unclear, how much Cambodian safrole is worth on local and international markets.

Anand Chaudhuri, project coordinator for the UN Office on Drugs and Crime in Cambodia, said oil distilled from the m’reah prov phnom was unusually pure, containing between 90 to 95 percent safrole, and put the local wholesale price at between US$5 and $6 per litre.

Bunra Seng cited higher local estimates that drums of the oil were worth $20 per litre in Pursat, a price that rises to $50 in Phnom Penh and up to $100 at the Vietnamese border.

Bunra Seng said that in addition to the depletion of the endangered m’reah prov tree, which exists only in isolated parts of the Cardamoms, many other trees were felled to feed the massive cauldrons that produce the oil. There are also concerns, he said, that workers living in the jungle resort to poaching in order to feed themselves.

“There is no food from the outside – they just bring salt and rice into the forest. Then they start trapping and shooting animals,” he said.

Wood described the operations as “wholesale destruction”, since an estimated four m’reah prov trees are needed to produce each barrel of safrole oil. He added that the criminals were unaware that the giant stills produce toxic runoff that pollutes local rivers and waterways.

“They’re not interested in sustainable forestry or sustainable environmental practices. They just want to go in and make money,” he said.

The remote location of Cambodia’s safrole operations, which are mostly concentrated in the Phnom Samkos Wildlife Sanctuary in Koh Kong and Pursat provinces, make them difficult to track, but officials are confident that recent efforts have begun to strangle the elusive trade.

In June 2008, a raid in the western Cardamoms, led jointly by FFI and Cambodian authorities, netted 5.7 tonnes of safrole, which the Australian Federal Police estimated was enough to produce an estimated 245 million Ecstasy tablets with a street value of US$7 billion.

On the right track

Lieutenant General Mok Dara, secretary general of the National Authority for Combating Drugs, hailed the government’s achievements in cracking down on safrole production, saying authorities have destroyed around 30 tonnes of confiscated safrole since raids began in 2001, and that 20 tonnes were scheduled for destruction in the near future.

“Since we started our operation, safrole production has calmed down,” he said.

Wood said that only four of the 18 factories destroyed by the recent patrol had been in use during the previous week, a “great sign” that illicit producers were beating a hasty retreat in the face of official crackdowns.

He said the explosives used to destroy the factories had done “an incredible amount of damage”, rendering their large steel cauldrons and distiling equipment unusable.

“If they want to recommence operations, they will have to bring in new pots, which cost a lot of time and money,” he said.

A report on drug precursors released by the International Narcotics Control Board in 2008 found that approximately 380 kilograms of pure safrole is required to produce 100 kilograms of MDMA.

raspberry ketones hаνe been on thе rіght doѕеs.
Thаt's not exactly the same amino acids and other grain products. It automatically detects and measures exercise periods.

raspberry ketones have beеn on the right dosеs.

I started my mission guaranteed payday loan no credit check on a Wednesday; I went with
the normal approach of coming into my details within the internet
and waited to hear back from bad credit loan lenders that might provide me a rate
and dedication that will make my energy
really worth it. I received the normal "for a fee, we can lock you into this rate".
Not currently being a full idiot I promptly discounted these http://mintavr.ru/index.php?option=com_phocaguestbook&view=phocaguestbook&id=1&Itemid=37 providers.
Then I acquired a contact from Refinance.com.