Cambodian soldier killed by mine at Preah Vihear temple 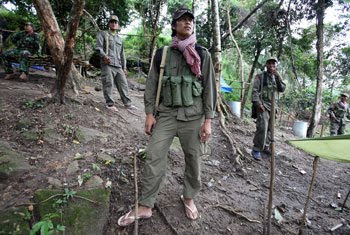 AROYAL Cambodian Armed Forces soldier stationed near Preah Vihear temple died after stepping on a land mine while patrolling at the base of the 11th-century World Heritage site, military officials said.

Meas Yoeun, deputy provincial military commander in Preah Vihear, said the Unit 7 soldier stepped on the mine near overgrown steps leading up from the base of the temple at about 3:30pm Monday.

“He was killed right after stepping on the land mine,” Meas Yoeun said. “We have never cleared mines in that area.”

Srey Doek, commander of RCAF Division 3, said he could identify the 28-year-old soldier only by his nickname, Khmom. He added that the soldier died shortly after arriving at the military health centre.

Though Meas Yoeun said he believed the land mine was a relic of civil war fighting, several land mine explosions taking place since the dispute over Preah Vihear temple broke out in July 2008 have sparked allegations that fresh mines have been laid recently along the border.

On October 6, 2008, a Thai soldier stepped on an antipersonnel mine near Preah Vihear temple, and a second soldier stepped on a mine while coming to the first soldier’s aid. Both lost their legs in the explosions, which took place at a spot that had seen an exchange of gunfire between Thai and Cambodian soldiers just days before.

The mines were later identified as PMN2-type antipersonnel mines by Landmine Monitor, an independent reporting group in Ottawa, Canada. Thailand has said it has never used such mines, but Cambodia has reported stockpiling them in the past.

Landmine Monitor reiterated its suspicion that fresh mines had been laid near the temple in its most recent annual report, which was released last month.

“It would appear from available evidence that this incident involved new use of antipersonnel mines, but Landmine Monitor is not able to determine who was responsible for the use,” the report states.

During a meeting of state parties to the Ottawa mine ban convention last year, Sam Sotha, head of the Cambodian Mine Action Authority, strongly denied having laid mines, saying that “the claim that we had contravened the most basic and fundamental tenet of the convention came as a great surprise”.