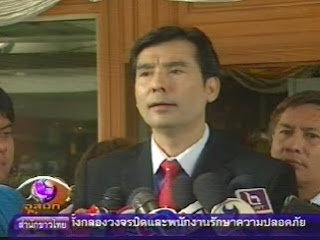 
BANGKOK, Dec 10 (TNA) – Members of Thailand’s Opposition Puea Thai Party on Thursday cancelled their planned trip to Cambodia next week to submit letters petitioning a Cambodian royal pardon for the Thai engineer convicted of spying in Phnom Penh, but will instead hand over the letters to the Cambodian embassy in Bangkok on Friday to hasten the process.

Puea Thai spokesman Prompong Nopparit earlier in the day said that several members of parliament including himself would travel to Phnom Penh and present letters from party chairman Chavalit Yongchaiyudh and several Puea Thai MPs asking for a royal pardon for Siwarak Chutipong to a representative of Prime Minister Hun Sen at the Cambodian Government House on Monday.

The opposition move came as Mr Siwarak’s mother urged the Puea Thai Party and ousted premier Thaksin Shinawatra for help after a Cambodian court sentenced her son to seven years prison and fined him 100,000 baht (US$3,000) for releasing Mr Thaksin’s flight details when he visited Phnom Penh last month.

Mr Prompong later said the party changed its plan to speed the process and will submit two letters to the Cambodian embassy in Bangkok Friday morning, while the last letter will be sent to Mr Siwarak's mother, now in the Cambodian capital, for her signature. He said that the petition for a royal pardon will be carried out by Mr Siwarak's lawyer there. (TNA)