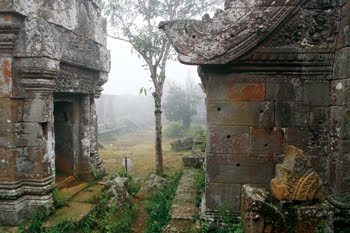 CONSERVATORS are at work restoring Preah Vihear temple and are set to plant about 2,000 hectares of forest in the surrounding area, officials said Thursday.

The 11th-century temple complex, listed as a UNESCO World Heritage site in July of last year, has long been a source of tension between the Kingdom and Thailand, which disputes Cambodia’s ownership of land around the site. At least seven soldiers have been killed in border skirmishes near the temple since July 2008.

However, the recent tension has not stalled preservation efforts at the temple, according to Chuch Phoeurn, the chairman of the National Preah Vihear Authority (NPVA).

“The process of preserving Preah Vihear temple is unrelated to the border issues – we’re still continuing our work,” he said.

Thus far, Chuch Phoeurn said, the NPVA has rebuilt the market near the temple that was destroyed during clashes between Cambodian and Thai troops this April, in addition to renovating local roads and relocating villagers living near the site.

UNESCO has contributed US$50,000 to these efforts, Chuch Phoeurn said, but he added that his organisation may need more than $200,000 to rebuild the gateway to the temple and complete the tree-planting project. He said he hopes these funds will come from the government, private donors, and the Bayon Foundation.

Sar Thavy, Preah Vihear deputy governor, said the number of tourists visiting the province’s eponymous temple had markedly increased in recent months, from around 300 in July to nearly 1,000 a month now. Between 50 and 100 of these tourists are foreigners, he added.

Chuch Phoeurn said, however, that Cambodia may lack the time to submit proposals to UNESCO requesting that two of the country’s other temples be recognised as World Heritage sites next year, and that he has not had the time to start writing the listing proposals.

“If we can not apply next year, we can apply the year after,” he said.