Rise in visitors to Cambodia masks decline in air arrivals

Visitor numbers climbed slightly in October compared to the same month last year, but a rise in the number of tourists and businesspeople arriving by land and sea from neighboring countries again masked a large decline in the number of arrivals by air, tourism ministry figures show. 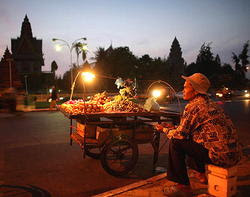 “We see that most visitors now are from the region, especially Vietnam, and they don’t spend as much on their trip or stay as long as tourists from further afield, such as Europe,” he said.

CATA studies have shown that visitors from Europe tend to spend a week or more in the country, whereas those from Laos and Vietnam spend three days and less money on average.

The ministry recorded that 157,105 people visited Cambodia in October, up 0.25 percent from October 2008, the month in which visitors to the kingdom began declining as a result of the global financial crisis after several years of steady month-on-month growth.

Arrivals from Vietnam climbed 67.26 percent year-on-year to 27,558 in October, and represent 17.54 percent of all arrivals, whereas visitors from South Korea fell 44.34 percent to 10,274. South Korea is now the sixth-largest source of visitors to Cambodia after leading the list a year ago – a sign of how much air traffic has been affected by the global economic crisis.

Kong Sophearak, director of the Statistics and Tourism Information Department at the Ministry of Tourism, acknowledged the drop in arrivals by air and said the government’s decision to offer visa exemptions to regional neighbors had gone some way towards offsetting the losses by encouraging regional tourism.

He said he hopes that a planned expansion of international routes flown by the new national carrier Cambodia Angkor Air will go some way to boosting tourism arrivals by air. He also said he anticipated that a recovery in tourism arrivals in November and December would see the country post a full-year increase in visitors of between 2 and 3 percent.

Arrivals during October this year were down 1.95 percent compared with the same month in 2007, a peak year for Cambodian tourism during which the country hosted more than 2 million visitors for the first time, the figures show.