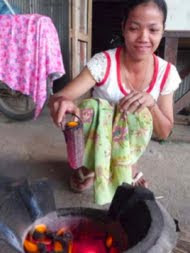 Simon Marks
A Cambodian woman makes use of “charbriquettes” made from coconut husks. The fuel is a cleaner substitute for the wood and charcoal that are traditionally used.

The factory, a venture backed by Geres and For a Child’s Smile, two French organizations active in Cambodia’s development community, aims to reduce demand for wood and charcoal that 80 percent of Cambodians use every day to cook and boil water.

“Climate change and global warming are serious issues these days,” said Yohanes Iwan Baskoro, Cambodia country director for Geres. The factory, Mr. Baskoro said, “will save about 1,600 tons of greenhouse gas emissions from entering the atmosphere” every year.

The number of households projected to use charcoal as an energy source here will rise to more than one million in 2015 from about 500,000 now, according to a 2008 study conducted jointly by Cambodia’s Ministry of Industry, Mines and Energy, the United Nations Development Program and Geres.

The projected increase has raised concerns among environmentalists, who say that charcoal production entails the removal of vast quantities of woodland, often in naturally growing forests.

According to Geres, Phnom Penh consumes 90,000 tons of charcoal every year, a market believed to be worth about $25 million.

The end-product, known as char, is crushed and mixed with water and cassava residue to form individual briquettes of fuel.

Mr Baskoro said that the biomass used to make the briquettes would otherwise decompose on the capital’s streets, releasing greenhouse gases into the atmosphere in the form of methane and carbon dioxide.

Moreover, there will be less dependence on producing charcoal from wood, most of which comes from naturally growing forests.

The briquettes, Mr. Baskoro said, “will preserve Cambodia’s natural forests by having a cleaner and safer alternative to wood and charcoal. He added that the briquettes produce less smoke and pose less of a threat to human health and the environment.

And while the briquettes will cost nearly three times that of charcoal sold on the streets of Phnom Penh, they will burn for nearly twice as long, according to Ly Mathheat, the executive director of the Sustainable Green Fuel Enterprise.