Catching up with the West 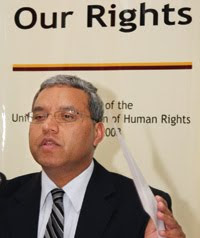 Surya Subedi, UN Special Rapporteur for Human Rights speaking to journalist during the press conference at UN on Thursday 25 June 2009.

UN human rights emissary Surya Subedi reflects on Cambodia’s virtues and flaws midway through his second mission to the country.

Have you found senior government officials – including the prime minister – to be helpful during your mission here? Has their reception of you differed from your last visit?

Things have changed – there was an environment of cooperation. I said to them that I am not here to criticise them, but to identify the weaknesses that exist in the system and to recommend measures to remedy the situation. They have listened to my recommendations … but they have a long way to go in improving the situation of human rights here and enhancing the independence of the judiciary, and strengthening the separation of powers. I think we have to look at these more closely, and that’s what I’m proposing to do during my second mission to the country.

Were there any specific issues that you were keen to discuss this time around?

Indeed. One issue was the development of binding national guidelines on land evictions. For the first time, after I made my submitted written report and made my speech to the Human Rights Council [in October], the recommendations of the international community included the idea. So I wanted to know what progress was being made to satisfy the expectations of the international community, and I was pleased to note that the guidelines are being developed and shared with the different stakeholders.

THE JOURNEY TOWARDS DEMOCRACY AND HUMAN RIGHTS IS A LONG ONE, ANYWHERE IN THE WORLD.

When you talk about “binding guidelines”, that implies that the officials at the top are willing to enforce them. Do you get the impression that there is a willingness to enforce stricter standards?

At this point in time, there seems to be a willingness to cooperate with my office and to work towards the adoption of binding national guidelines.

My perception is that [the 2001 Land Law] is not bad. If that law was properly implemented, people with possession rights would be given some opportunity to express their grievances and seek compensation.

I want to ask you about the Uighur asylum seekers who were deported on December 19, in a move that many have linked to a Chinese aid pledge a few days afterwards. Do you see this as a step backwards for Cambodia?

Well, there are two issues here. One is the encroachment of the existing immigration laws. All countries have immigration laws, and our issue is that – even in the UK or Australia – there are rackets [and] gangs operating and trafficking in people. That’s one thing. The other is genuine refugees, who should be treated as such by any government that is party to the 1951 Refugee Convention. So the matter did come up in my meeting with the prime minister, and I did spell out that Cambodia has an obligation to respect international obligations.

Did you discuss this issue in your talks with the US ambassador last Friday?

We did discuss a wide range of issues relating to Cambodia’s compliance with international standards, whether it is to do with refugee laws, conventions or other rights – generally in creating an environment in which everybody can enjoy their rights. Some rights are accorded to citizens, some are available to all people living within the borders of Cambodia. Any individual – even if they are not a citizen of that country – is entitled to the protection of international law.

Do you think the Office of the UN High Commissioner for Refugees made a mistake in putting so much trust in the government to do the right thing in the Uighurs’ case?

Like the people of Cambodia expect, the United Nations in Cambodia expects me to convey that message to the government during my dialogue, and that’s what I have done.

Underlying this whole issue is the rise of China as a force in the region. What effect do you think this is likely to have on human rights in the region? Do you see it as a danger?

Well, the way I see it is that the United Nations belongs to China as much as it belongs to any other nation. China is a prominent member of the UN and one of the permanent members of the Security Council, so China has a responsibility – like any other country – to support the government of Cambodia to protect and promote human rights for citizens in the country.

The UN is a collective organisation: Cambodia is a member, China is a member, and I expect China to work towards promoting and protecting human rights in this country.

But it seems like China in many cases simply ignores its obligations. Do you think there is the political will in Beijing to adhere to these largely voluntary obligations?

In the past, many Asian leaders have argued that human rights are inimical to Asian culture, which is supposedly based on the rights of the community rather than the rights of the individual. What role do you think culture plays in bringing human rights into countries like Cambodia that have historically never experienced anything equivalent to it?

Human rights are the values defined in international treaties, which all countries have ratified. These values support a peaceful transformation of the country and the road towards prosperity. So the idea that Asian countries are different, that Asian values are not necessarily compatible with these values – I do not subscribe to that view. The core Asian values and other traditions in Asia are also conducive to supporting human rights.

Human rights were developed when Western nations had a prominent role to play in the UN, but the basic values enshrined in international treaties are quite in conformity with the core values of the Asian region as inscribed in religious scriptures.

What do you think is the main driver of progress? What’s driving the improvements?

In that prosperity, people will find peace and harmony. That’s what human rights does, and that’s what I’d like to see happen in this country as well: press freedom, freedom of speech, freedom of assembly, transparency [and] plurality – accepted by the government not only on paper, but in practice as well.

Human rights didn’t take root in the West for several hundred years. Do you see this project in terms of years or generations?

The journey towards democracy and human rights is a long one, anywhere in the world, more so in developing countries like Cambodia.

But the manner in which these countries have progressed economically, it should not take them as long as it has taken in other countries. They are catching up very fast.

During that process of catching up, we need to be constantly alert, pointing out the deficiencies that exist and making recommendations for them to move in the right direction. So the contribution that our mission can make to the history of this nation is to mature the process and move it forward.