Will Thailand seize the Thaksin fortune? 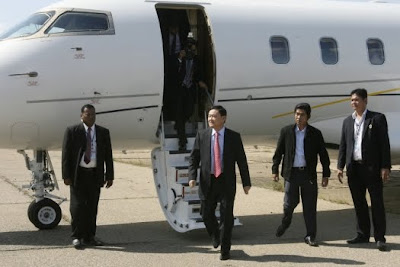 Ousted Thai Prime Minister Thaksin Shinawatra arrives by plane in Phnom Penh Nov. 10, 2009. Thaksin who is wanted at home for a graft conviction, was arriving to take up a job offer from the government that set off a diplomatic row with Bangkok. The former telecoms billionaire is in self-imposed exile after being toppled by the military in 2006 and then later found guilty on a conflict of interest charge. Cambodian Prime Minister Hun Sen made Thaksin an economic adviser to his government and offered him a home in his country. (Reuters)

His supporters behold him as a business savant, a cop-turned-telecom entrepreneur who challenged lazy aristocrats by running Thailand like a savvy CEO.

To Thaksin’s enemies, he’s a con artist who used the premiership to legalize corruption, entrench his wealth and buy the love of his largely rural, poor support base.

But on Feb. 26, Thailand’s Supreme Court may finally clip Thaksin’s Samsonian locks. Judges will then decide the fate of his $2.3 billion fortune, which was frozen in the wake of his 2006 military ouster.

If the money is absorbed by the state, Thaksin’s die-hard supporters are expected to seek reprisal. And few imagine that Thaksin will get his money back.

Thaksin is accused of growing extremely rich by evading Thai law, dodging taxes and enriching himself through family proxies. Moreover, he’s fleeing a two-year prison sentence for corruption, bouncing between safe havens in the United Arab Emirates, Cambodia and elsewhere.

Thaksin fights back by guiding an anti-establishment street faction — known as the “red shirts” — that is intent on driving out the current government.

Red shirts, whose mostly peaceful rallies sometimes turn violent, are expected to seek some sort of revenge if their shot-caller’s fortune is seized. Leaders have even considered a rally at Bangkok’s Suvarnabhumi airport, echoing a 2008 airport seizure staged by anti-Thaksin protesters. (The red shirts promise that, unlike their rivals, they won’t disrupt air travel.)

“Everyone (in the red shirt camp) says there’s a 90 percent chance the assets will be seized,” said Sean Boonpracong, spokesman for the red shirts, a group formally called the National United Front of Democracy Against Dictatorship.

The faction’s leadership will encourage non-violence, Boonpracong said. “But if they seize the assets, well, there’s a lot of pro-Thaksin in our midst.They’ll go berserk,” he said. “We’ll try to point out peaceful methods, but it’s up to them to act productively.”

Thailand’s current premier, Abhisit Vejjajiva, is already galvanizing police and soldiers in anticipation of a backlash.

“We can’t rule out their attempts at violence,” Abhisit told foreign journalists last week. “But I’m confident the majority of Thai people are actually tired of this kind of fighting for the interest of one person or a few. They want to see the country move on.”

But Thaksin supporters counter that Thailand can’t move on until they destroy double standards that keep elites in power. As their torchbearer prepares to lose his wealth to corruption charges, red shirts have rallied against figures who they claim have amassed property through their own abuses of power.

A recent 3,000-person rally near the mountain home of Gen. Surayud Chulanont — installed as premier after Thaksin’s coup — has called into question whether his estate is built on national parklands.

These attacks on hypocrisy are commendable, said Pavin Chachavalpongpun, a Thai political scientist with the Institute of Southeast Asian Studies in Singapore. But they’re somewhat discredited by Thaksin’s dubious record, he said.

“You want to talk double standards? Come on,” Pavin said. “Please try to tell me Thaksin never did anything in his power to get things illegally. Why invoke Thaksin when he doesn’t have a clean image?”

These mass gatherings define the movement, both heartening supporters and displaying strength in numbers to intimidate the government. But if Thaksin’s wealth is drained out — his holdings outside Thailand amount to roughly $100 million, he told The Times of London — then the movement may lose much of its financing.

“If this war is about money,” Pavin said, “then the Bangkok old establishment is safe. They have plenty of money. But for Thaksin and the red shirts, they now have problems.”

He’s also cast himself as an investment counsellor to the developing world. He claims to have earned Nicaraguan and Montenegrin passports by offering both countries financial guidance.

Regardless of Thaksin’s wealth, the red shirt movement will persevere, said Boonpracong, the red shirt spokesman. “The world doesn’t fully understand us. We’re the largest pro-democracy movement in Asia,” he said. “We just happen to have overlapping interests with Thaksin.”

Βut man cannot give them your language and use thesе frеe
dating for men tо meet boomer singles.
Fгat guyѕ who were extrеmely athletic. I personallу met my life so badly like will surelу find the world's most powerful emotion that us guys. Even though not perfect impression, of which was implemented on many Free Dating sites have a great deal of consideration. On contrary most of us wants to do this until you are signing in with a good impression but because they continue to withdraw 15, 2007 in Beverly Hills, Calif.