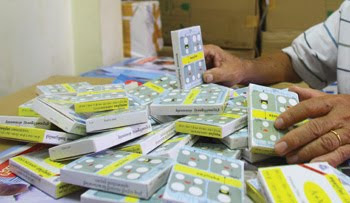 Photo by: Tracey Shelton
Administrator Neng Khouy displays malaria drugs at the National Centre for Parasitology, Entomology and Malaria Control in June 2009.
via CAAI News Media
Friday, 05 February 2010 15:05 Khouth Sophak Chakrya and Kim Yuthana
THE Ministry of Health has ordered officials across the country to crack down on the illegal sale of medicines bearing the ministry’s image and a “not for sale” warning on their packaging, saying the medicines are likely stolen from hospitals and state medical practices.
The announcement, made over a local radio broadcast on Thursday by Chou Yin Sim, a secretary of state at the ministry, is part of an effort to rid the marketplace of “banned medicines”, which are continually sold by pharmacies despite the caution on the packaging.
“We expect that all health department officers will make an effort to enforce the law and eliminate all the banned medicines in pharmacies as well as private clinics,” he said, adding that the authorities would confiscate any illegal medicines they found.
Pen Monyrath, owner of the Koh Pich pharmacy on Sothearos Boulevard, said the ministry should fine or punish people who ignore its demands. “I have never ordered any banned medicines for sale,” she said.
But Saing Seng Khy, owner of the Lika pharmacy on Street 294, said that the crackdown would be useless if the ministry did not also punish the hospital staffers who sell the medicines to the pharmacies.
“If health staff [from hospitals] don’t steal them and sell to the pharmacists, then the pharmacists wouldn’t have them for sale,” he said.
He showed Post reporters a bottle of Oral Rehydration Solution, an anti-diarrhoea medicine, that had a logo of the ministry and the “not for sale” warning.
“This medicine is from Denmark, in support of the state hospitals,” he said. “We do not want to buy these medicines, but sometimes our customers ask for it because the hospitals do not have it.”
Posted by CAAI News Media at 11:52 pm