Partnering the sacred in music and dance 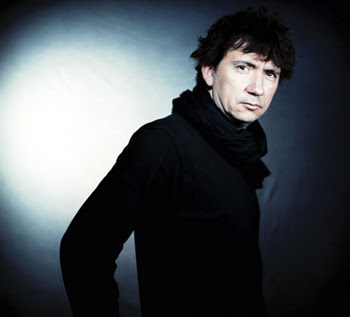 French cellist Vincent Courtois will play the classical music of Johann Sebastian Bach at Chenla Theatre this weekend. CCF
Thursday, 11 February 2010 15:00 Sarah Outhwaite
A weekend performance at Chenla Theatre will bring together the music of Bach and the traditional dance of Cambodia
Phnom Penh
THE French musician and the Cambodian dancer work together in perfect tandem, playing their instruments of cello and body.
Only when they stop for conversation does distance open between their perspectives on the duet. To the musician, classical heritage has been revered to the point of rigidity. To the dancer, having a classical heritage remains a fragile privilege.
Dancer Belle Chumvan and cellist Vincent Courtois rehearse their duet, the centrepiece of this Friday’s premier Suites at Chenla Theatre.
The second of three performances in this month’s Dansez Roam series, it is organised by the French Cultural Centre and Amrita Performing Arts.
The show pairs Johann Sebastian Bach’s cello suites – those lovingly overplayed pinnacles of Western classical music – with dancers for whom the music is entirely fresh.
Accompanying Cambodians allows Courtois to rethink Bach, and he finds this a welcome departure from convention.
“Bach is so sacred in the West, where it’s so much in the collective unconscious,” he says. “I like that the dancers are totally virgin to this music. I become new to it, too.”
Performer Chumvan has choreographed an extended solo to the second cello suite. This encounter offers exciting possibilities but also reminds her of the delicate nature of her own sacred dance.
“I feel the music is sad,” Chumvan says. “I start thinking of all the teachers, singers and master artists who died because of Khmer Rouge. Always the experts.”
Chumvan is one of nine dancers developing personal interpretations of the Bach suites. A group of Amrita performers collaborates with Courtois on the first suite, and a different group choreographs for the third suite. In the final piece Courtois is joined by young musicians who play harmonies to his Bach cello on their traditional instruments.
Courtois delights in how the familiar classical music is revitalised through the sound of Cambodian accompaniment. “It feels so anachronistic that in the end, it’s not,” he says.
Contemporary dance often privileges exploration in this way. Chumvan notes how confusing it can become.
“Ten teachers give 10 different ideas,” she says. “Not like classical with only one way.”
Chumvan continues to question what “contemporary” means and how strongly her spirit moves toward it. The very teachers she reveres in her Bach choreography have cautioned her against altering traditions so recently recovered.
“The master says, you start to do something crazy? You want to kill classical?” says Chumvan. “But if we have something new, we have a new choice.”
Chumvan continues to ask hard questions as she develops her ideas and synchronicity with Courtois in preparation for the performance.
While rehearsing with the cello, Chumvan’s movements radiate from the core of Cambodian dance but extend beyond it with sensitive speed and lizard-like clarity.
When young Cambodians tell Chumvan they want to emulate her contemporary style, she asks them, “Do you know Khmer dance? First, you should understand who you are.”
Hearing this, Courtois gives his own perspective. “You can forget your roots if you know them,” he says, indicating his heart.
For Chumvan, this point has not yet been reached. “Here, everything develops,” she reminds us, “and like everything else, culture is still not really grown up.”
Vincent Courtois and Cambodian dancers will present Suites at 7pm on February 12 and 13 at Chenla Theatre in Phnom Penh Cultural Centre (at Mao Tse Tung and Monireth boulevards).
Posted by CAAI News Media at 10:27 pm