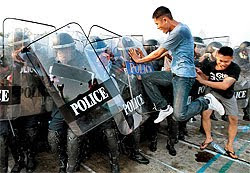 PUSH ME: More than 4,000 police and military officers engage in an anti-riot drill at the 11th Infantry Regiment, Royal Guard, in Bangkok. The officers were training in crowd control skills. PHOTO: CHANAT KATANYU
via CAAI News Media
Published: 21/02/2010
Newspaper section: News
Prime Minister Abhisit Vejjajiva yesterday called on all parties to respect a court ruling on ousted leader Thaksin Shinawatra's wealth, otherwise the country could plunge into lawlessness.
Mr Abhisit said a judicial review should be treated with respect as its procedure was considered a fair and open one.
He said he hoped every concerned party would listen to what the court would say, which would cover details of events and legal facts.
If a court ruling is not respected, the conflict will never come to an end and in future laws would not be obeyed, he added.
His call came amid speculation that pro-Thaksin elements would hold a rally to protest against the court verdict if it did not come out in the former premier's favour.
Security is being intensified ahead of the ruling by the Supreme Court's Criminal Division for Holders of Political Positions on Friday.
An opinion poll showed more than half of respondents lacked confidence in the government's ability to control the situation on the day of the judgement.
About 56% of the 1,250 respondents to the Bangkok Poll said that they doubted security agencies could keep the situation under control.
If violence erupts, about 34% said they were concerned about further social divisiveness while 23% are worried about the economic impact.
About 43.4% hoped the verdict would put an end to political polarisation.
Meanwhile, an intelligence expert and political observer said yesterday the pro-Thaksin group is unlikely to instigate violence even if a court ruling did not favour Thaksin. Phummarat Thaksadipong, former director of the National Intelligence Agency (NIA), said that a strong alliance between the government and the military was enough to keep pro-Thaksin elements at bay.
"Even if the court rules to seize all the assets, the red shirt group will not incite violence.
"They are aware those who start it will lose and they are afraid of being jailed," he said.
However, Mr Phummarat said it is important for the government to eliminate factors which would contribute to violence.
"There are two factors - intent and capability. If the government is lax it will give them opportunity [to cause violence]," he said.
According to Mr Phummarat, Thaksin has made his intention clear and he has never let up in his campaign against those who brought him down.
"He uses Twitter. He phones in. He is fighting to get his 76 billion baht back," he said.
The former NIA chief said the red shirt groups are capable of instigating chaos especially if they are aided by Panlop Pinmanee, the former deputy director of the Internal Security Operations Command, and Lt Gen Pirat Sawamiwat, a close aide to Puea Thai chairman Gen Chavalit Yongchaiyudh.
He linked them to violence in the May 1992 uprising.
He added that the government has done little to educate the public about the asset seizure trial and it was important the public understands the implications of the court ruling.
"The people are directly affected if violence erupts. The government should have given them information," he said.
He called on the government to keep an eye on the movement of communist remnants in the Northeast who reportedly received weapons training in Cambodia.
According to Mr Phummarat, these people have returned to Thailand and are in hiding.
It is not known what their mission was.
Posted by CAAI News Media at 9:20 am