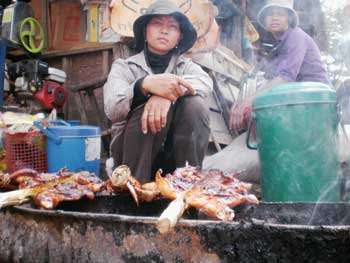 Photo by: Rann Reuy
Pen Sambath grills chickens after her stall in Pouk market in Siem Reap province was removed by officials on Thursday morning.
via CAAI News Media
Friday, 19 February 2010 15:03 Rann Reuy
Vendor representatives say up to 100 people had stalls on market’s outskirts.
Siem Reap Province
DESPITE protests from vendors, police on Thursday dismantled and removed stalls that had been erected in front of Pouk market in Siem Reap province, carrying out an eviction that was announced in January but then delayed twice.
Pech Sokhalay, governor of Puok district, said that “hundreds” of police and military police had been deployed to the market site for the eviction, which began at 5:30am.
He said the eviction had been nonviolent and “successful”, adding: “We will use this site for car parking, and we will not allow anyone to sell in that area again.”
Local officials told the vendors in late January that they would need to leave because they were creating a nuisance for customers and merchants inside the market, and because they had positioned their stalls too close to a national road.
Vendor representatives have said that up to 100 stall-holders were situated outside the market, but district officials have put that number at 35.
Kung Phea, 35, who sold grilled chicken outside Pouk market before Thursday’s eviction, said Thursday that vendors had tried to prevent police from tearing down their stalls but had been outnumbered.
“I am so disappointed that the officials have chosen to do this, but I can’t do anything back because we have only bare hands,” she said. “I am just really upset.”
Officials have proposed that the vendors move to a private market nearby, and have arranged for them to be granted three months’ free rent.
After the three months, vendors would have to sign a contract to remain at the new location.
However, the vendors have refused, saying the private market receives little business, and that the rent is too high.
Hy Mach, 35, another of the vendors who was evicted from her stall near Pouk market in Thursday, said she had no intention of going to the new market.
“I will not go to sell at the new site because it is far from the road, and it is difficult to find customers there,” she said.
Posted by CAAI News Media at 11:13 pm