Hun Sen tells officials not to meddle with vice crackdown 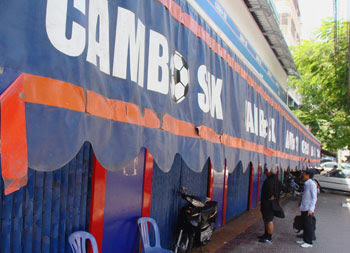 Photo by: Heng Chivoan
People check out a closed Cambo Six football betting parlour shortly after Hun Sen announced the stripping of the company’s licence during a speech at the National Institute of Education in February 2009. The premier decried the persistence of illicit gambling in a speech on Thursday.
via CAAI News Media
Friday, 05 March 2010 15:06 Vong Sokheng and Khouth Sophak Chakrya
HIGH-ranking officials must stop undermining government and police efforts to stamp out illicit gambling and prostitution, Prime Minister Hun Sen said Thursday.
Speaking at an event in Phnom Penh to mark next week’s International Women’s Day, Hun Sen said some senior officials are guilty of “misconduct”, intentionally circumventing efforts to reduce human trafficking and gambling.
“I am regretful of the misconduct of some leaders who have interfered with the court and law enforcement officials,” Hun Sen said. “The culture of impunity is not acceptable.”
Hun Sen did not name specific officials in his speech, during which he urged police to step up actions targeting human trafficking and gambling.
“We have already closed down slot machines, lotteries and cockfighting industries, but I question whether the industries still remain open or not,” he said. “I would like that the year 2010 is the year to take measures to fight against human trafficking and all forms of illegal gambling.”
Officially, all forms of gambling are banned in the King dom – except when “permitted by the Royal government”, according to the 1996 Law on the Suppression of Gambling.
Cheam Yeap, a senior lawmaker with the ruling Cambodian People’s Party, said there are currently 32 licensed casinos in the Kingdom, mostly built along border areas.
Casinos have proved to be a valuable income generator, bringing almost US$20 million into government coffers in 2008, officials have previously said.
However, that was before a 2009 crackdown when the prime minister abruptly ordered all sports-betting outlets and slot-machine parlours to close, saying they were causing a moral decline in Cambodia.
Speaking at the same event, Minister of Women’s Affairs Ing Kantha Phavi said violence against women and children still remains a significant problem in the Kingdom.
She decried what she said were increasing fears by teenagers of gang rape, which she linked to the consumption of alcohol, drugs and pornography.
“These issues have intoxicated the social atmosphere and damaged the public order,” she said. “They are psychologically affecting our youth and creating unfavourable conditions for the next generation.”
Posted by CAAI News Media at 11:43 pm