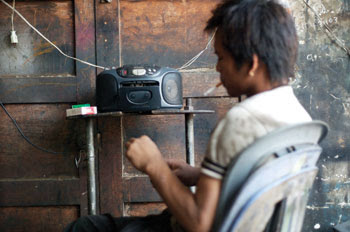 Photo by: Sovan Philong
A mechanic takes a smoke break in his garage in Tuol Kork district in January. Health officials and NGOs on Thursday presented six recommendations designed to curtail smoking in the Kingdom.
via CAAI News Media
Friday, 05 March 2010 15:05 Chrann Chamroeun
HEALTH officials and NGOs have formulated six recommendations for the government to step up its anti-smoking efforts, as a national seminar on tobacco control wound up in Phnom Penh on Thursday.
Lim Sareth, a health promotion officer from the Adventist Development and Relief Agency (ADRA), said 82 government officials and 50 NGO representatives joined the two-day seminar, which discussed strategies for controlling tobacco use in the Kingdom.
At the end of the seminar, officials presented six main strategies for reducing the health impacts of cigarette smoking.
Among these were a higher tax on tobacco products, photographic warning labels on cigarette packages, a blanket ban on tobacco advertising, and public education programmes focusing on the negative effects of tobacco.
At the close of the seminar, Ho Norn, chief of the National Assembly’s Commission of Public Health, Social Affairs, Veterans, Vocational Training and Women’s Affairs, applauded the efforts of NGOs to put the risks of smoking on the agenda.
“I am very happy and congratulate the great result of your improved efforts in strengthening the well-being of the people through this seminar,” she said. “We all know that tobacco is a product endangering the lives of users and other people, causing many diseases, such as strokes, heart attacks, stomach pain [and] liver disease.”
After the seminar, ADRA’s country director Mark Schwisow expressed hopes that the government would follow the recommendations, citing Ho Norn’s support as a positive step towards “improving people’s health and reducing poverty”.
In 2005, Cambodia became a signatory to the World Health Organisation’s Framework Convention on Tobacco Control. In January, the government announced that warnings would appear on cigarette packets by July, but stopped short of requiring the “shocking”graphic-image warnings promoted by the WHO.
Posted by CAAI News Media at 11:39 pm