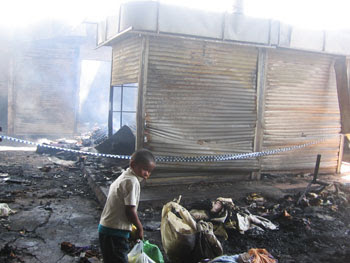 Photo by: Photo Supplied
A boy sifts through the rubble after a fire in Kampong Thom province’s Stung Sen district last week.
via CAAI News Media
Monday, 08 March 2010 15:04 Kim Yuthana
VENDORS from a market in Kampong Thom province that was heavily damaged by a fire last week rallied in front of Prime Minister Hun Sen’s residence in Phnom Penh on Friday to request his assistance in rebuilding their stalls.
The fire, which officials have attributed to faulty electrical wiring, tore through the main market in Kampong Thom’s Stung Sen district last Tuesday, destroying about 160 stalls. Five fire trucks were dispatched to fight the blaze, which began at about 2am and was extinguished by 4am.
There were a total of 400 stalls in the market prior to the fire.
Nam Chreng, a 45-year-old vendor, said he and 127 other vendors presented a letter at Hun Sen’s house requesting assistance, adding that a Cabinet official had accepted the letter on the prime minister’s behalf.
Another vendor, who gave her name only as Mabb, said the vendors would not be able to repair the market by themselves.
“We would like to call for Prime Minister Hun Sen to help rebuild the market for us so that we can resume our jobs again,” Mabb said.
“We believe that only the prime minister can help us, as he has helped vendors of markets in other provinces.”
Cabinet officials could not be reached for comment on Sunday.
Nhem Chhunly, inspector for Stung Sen district police, on Sunday estimated that the fire caused US$530,000 in damage.
Two days after the fire, more than 100 vendors rallied in front of Kampong Thom provincial hall to ask the provincial governor to intervene.
Chhun Chhorn, the provincial governor, said Sunday that he had already finalised a report detailing the damage caused by the fire, adding that it had been sent to Hun Sen on Friday.
“The provincial authority has no money to rebuild the market, the construction of which costs about $200,000, so we will have to wait for comments on what we should do from our superiors,” he said.
Posted by CAAI News Media at 10:37 pm