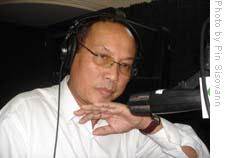 via CAAI News Media
By Chun Sakada, VOA Khmer
Original report from Phnom Penh
23 March 2010
Two international organizations on Tuesday called for the full protection of rights defenders and lawyers, who are often targeted with violence and lawsuits for their work protecting people from land theft.
Lawyers Rights Watch Canada and the Asian Legal Resource Center said in a joint statement the government should “ensure full protection to human rights defenders and lawyers working on land rights issues so that they may carry out their duties without improper interference.”
“We call upon the government of Cambodia to implement recommendations to carry out legal and judicial reforms to address the ongoing problem of impunity by guaranteeing the independence and impartiality of judges, prosecutors and court personnel in keeping with international standards,” the groups said.
Phay Siphan, a spokesman for the Council of Ministers, said the groups were not addressing “the current work of the government,” which has already undertaken “legal modernization.”
The government has also undertaken disciplinary measures against judges, prosecutors and court personnel who break the law, he said.
“They should have written a more qualified report to avoid the mistake of attacking the Cambodian government,” he said.
Rights groups in Cambodia say they are consistently under attack.
In 2009, Adhoc recorded 235 complaints against human rights defenders in courts, leading to 147 arrests, 89 releases on bail and 58 detentions. Adhoc also reported dozens of beatings of rights workers by police, with few of the cases acted on by the judicial system.
In June 2009, an opposition lawyer, Kong Sam On, resigned and joined the ruling Cambodian People’s Party, after the lawyer for Prime Minister Hun Sen filed a complaint with the national bar association.
Kong Sam On was supposed to defend Sam Rainsy Party lawmaker Mu Sochua in a defamation lawsuit brought by prime minister.
Posted by CAAI News Media at 10:46 am

Google guideline : Make your site easier to navigate.
Getting the best SEO software is important
in that you get help building back links, you get automation, and it gives
you unparalleled convenience. Simply put, the best SEO
software is essential to succeed online.
Also see my web site :: review of ultra spinnable articles