Status of women must be improved in Kingdom 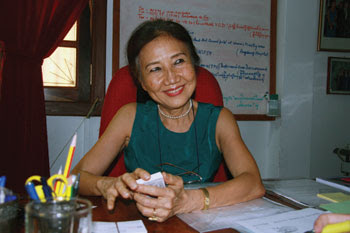 Photo by: Sovan Philong
Pung Chhiv Kek at the Phnom Penh headquarters of the human rights NGO Licadho, which she founded, photographed last year.
via CAAI News Media
Wednesday, 24 March 2010 15:02 Dr Pung Chhiv Kek
Dear Editor,
International Women’s Day on March 8 gave NGO-CEDAW [Convention on the Elimination of all Forms of Discrimination against Women] the opportunity to emphasise once more the crucial importance of women in a society where they are, along with their husbands, the backbone of the family and the primary support of children for health and education.
A country such as Cambodia, struggling to alleviate poverty, cannot achieve harmonious development without the full contribution of women in every part of society.
The following are crucial to improving the status of women in Cambodia:
We would like to urge the government to continue its efforts to target the weak health system that still allows a catastrophic rate of maternal mortality.
A lot needs to be done to improve the awareness and training of health workers, midwives and the general public in order to enhance health security for women.
Women are especially at risk during pregnancy or during sexual intercourse, if their husbands or partners are HIV-positive or have other sexually transmitted diseases.
Media awareness campaigns broadcast on radio and television should receive government sponsorship instead of being treated as any other commercial advertisement.
In addition, efforts should be undertaken to improve the number and quality of health centres in remote areas of the Kingdom. Attention should be given to providing basic equipment in order to better react to health emergencies that arise during pregnancy and childbirth.
The distribution of free condoms could also allow women to better protect themselves against STDs, and hospitals and health centres should be encouraged to provide free testing for HIV and other STDs, .
It is time to continue efforts in order to improve the currently grim status of education in Cambodia (decreasing resources, teacher shortage and lack of training, corruption, low-quality teaching, half-day schooling, high drop-out rate).
As usual, the situation for girls is worse than for boys, and drop-out rates among girls are much higher. Despite much-publicised government efforts, results do not match expectations: 67 percent of women above the age of 25 have not completed primary school compared with 46 percent for men.
The minister of education has already done a lot to increase the number of female students at all levels, however current figures show that the number of girls enrolled each year still lags behind the number of boys. According to official statistics, about 10 percent of children do not attend school.
Schooling for girls between the ages of 15 and 17 is more likely to be replaced by work because of the current levels of economic pressure and discrimination against women in the Kingdom.
According to official figures, 83 percent of women work in the informal economy, where their rights are not guaranteed. Among them, only 69 percent have an acceptable level of reading and written literacy (that figure among men is 84 percent). This gap has a negative impact on women’s ability to find quality employment. It reduces their access to information and their ability to defend their rights, to protect the level of their wages and to resist harassment.
Since there is no specific law to punish gender discrimination in the workplace, women often receive 30 percent less in salaries than men, while also facing constant challenges to ensuring that managers respect their rights, particularly with respect to pregnancy leave.
Furthermore, poverty, low education and lack of employment opportunities in rural areas encourage young women to leave their homes and work in high-risk labour markets (entertainment, massage and karaoke parlors, brothels), making them subject to exploitation and sexual abuse.
Let us work together to improve the situation of our women in Cambodia, and improve the future of our country.
Dr Pung Chhiv Kek, president
NGO-CEDAW
--------------------------------------------------------------------------------
Send letters to: newsroom@phnompenhpost.com or PO Box 146, Phnom Penh, Cambodia. The Post reserves the right to edit letters to a shorter length.The views expressed above are solely the author’s and do not reflect any positions taken by The Phnom Penh Post.
Posted by CAAI News Media at 11:35 pm