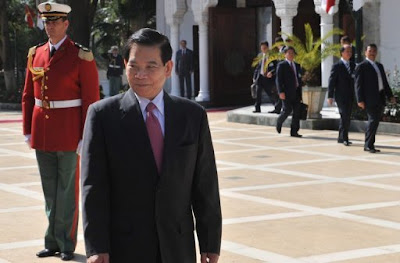 via Khmer NZ News Media
HANOI — Vietnam's president praised cooperation with neighbouring Cambodia Tuesday during a private visit by former king Norodom Sihanouk and members of his royal family, state television reported.
Sihanouk arrived in the Vietnamese capital with his wife and his son, King Norodom Sihamoni, for a four-day stay.
The ex-monarch is sometimes known as the "king-father" of Cambodia, where anti-Vietnamese sentiment is rife, fuelled by resentment at Vietnam's expansion over centuries and the perception that Cambodia is losing territory.
But communist Vietnam's President Nguyen Minh Triet said the visit showed relations between the two are close and important, state television said.
Vietnam and Cambodia, as well as their fellow neighbour Laos, are determined to maintain solidarity, Triet added.
According to the report, Sihanouk thanked Vietnam for its support.
Vietnam invaded Cambodia in 1978, overthrew the murderous Khmer Rouge regime the following year, and occupied the country for 10 years.
"Being retired and no longer doing politics nor diplomacy, my journey and trip to the glorious Socialist Republic of Vietnam will have a strictly private character," Sihanouk said in a statement dated June 14.
He was to meet other current and retired leaders of Vietnam, and attend a performance at Hanoi's Opera House, a Vietnamese source said.
Sihanouk abruptly quit the throne in October 2004 in favour of his son, citing old age and health problems. He remains a prominent figure in Cambodia and often uses messages on his website to comment on matters of state.
Cambodia and Vietnam share a 1,270-kilometre (790-mile) border, which has remained vague since French colonial times, but in 2005 they signed a border accord that has helped calm tensions after decades of territorial disputes.
Vietnamese businesses are also investing in Cambodia.
Posted by CAAI News Media at 7:50 am