Chanthy cleaning up as a coach 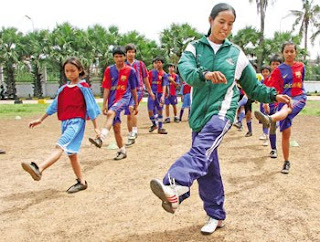 Leng Chanthy leads a warm up routine with children from the Indochina Starfish Foundation in the grounds of Olympic Stadium. The 36-year-old former cleaner is one of only two female football coaches in Cambodia to hold an official AFC C-licence. Sreng Meng Srun
via Khmer NZ
Friday, 23 July 2010 15:00 H S Manjunath
From a menial job as a cleaner at a charity organisation to a celebrated C-licence football coach, life has turned full circle for Leng Chanthy, a 36-year-old villager from Svay Rieng province who can barely read or write Cambodian script let alone English.
The first step on this incredible journey for the unassuming Chanthy, nicknamed Srey Mao by her friends, was a mere kick of a football in a park with the local kids.
Chanthy’s rise to notoriety in less than three years, as one of only two female Cambodian coaches with an internationally recognised licence, is a striking example of how football has the power to change lives. 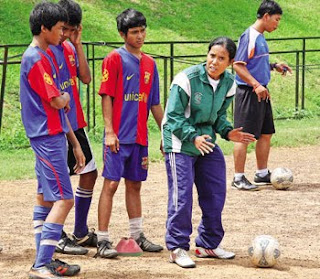 Leng Chanthy gives coaching to a group of boys during a training session in the grounds of Olympic Stadium. Sreng Meng Srun
When the Football Federation of Cambodia announced the Asian Football Confederation-backed certification course for coaches recently, the response was expected to be poor. Chanthy and Loeng Sophorn from Siem Reap province were the only women entrants, among scores of aspiring men. But to the amazement of all, both women came through with flying colours. Sophorn is currently pursuing her coaching career in Siem Reap.
Life had never been kind to Chanty and her small family. Her father eked out a living by doing odd jobs, with the income barely enough to make ends meet. Chanthy’s recollections of her childhood are hazy but often painful.
The family was driven out of the village at the height of the civil war when Chanthy was four. Seeking shelter across the border in Vietnam, they were driven from one town to another. Having endured their most demanding and tormenting phase, Chanthy was finally old enough to seek a living of her own, with Phnom Penh her preferred destination.
In 2007, she landed a job as a cleaner at the Indochina Starfish Foundation, a well regarded NGO set up the previous year to help some of the most impoverished local children gain a free education. Football has always been a part of ISF’s programme, with the kids receiving weekly coaching, and it was at one such session that Chanthy became hooked.
A regular coach had failed to turn up, and Chanthy offered to take the kids out and look after them. “From that day on she grew so passionate,” said Kate Griffin, Country Manager of ISF. “We had nothing but admiration for her spirit and we let her get on with football.”
Chanthy had dabbled in village volleyball games but never had a chance to kick a football. However, once she got involved, her love for the game grew by the minute.
“She was amazing. We encouraged her to take up a D-licence, which she did. She was looking after our football teams. She would spend hours watching football DVDs, videos, [video] games, and her power to grasp the nuances of the game was really striking,” said Griffin. 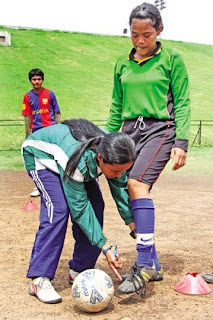 Leng Chanthy explains to a girl from the Indochina Starfish Foundation which part of the foot to kick the ball with. Sreng Meng Srun
As Chanthy’s knowledge began to widen, she was given more trainees under her wing and grew far more confident. Gone from her were the meek and mild looks and she became tough as nails.
“We at ISF realised that Chanthy was destined for better things in football, so we wanted her to go for the C-certificate,” said Griffin. “Literacy was of course a crucial factor but we knew she could fight off these odds.”
Nervousness inevitably crept in when Chanthy took the certification course. Practicals were a piece of cake, but theory proved difficult. She would often explain her thoughts and answers to her classmates and one of them would put them down in writing for her.
The Football Federation of Cambodia took a lenient view, respecting her devotion and determination.
”The language of football is universal and Leng Chanthy is well versed in it,” said FFC Deputy Seceretary May Tola. “So it really doesn’t matter if she is totally illiterate. We tested her skills with oral examinations. She provided perfect answers and we were happy to help her along.”
The federation official revealed that Chanthy scored better than half of her classmates, including men. “She was assessed by both Prak Sovannara [Cambodia’s only A-licence coach] and Scott O’Donnell [then national team coach]. She did a second oral exam with me. I was impressed with her ability of understanding,” May Tola told the ISF.
The FFC commended ISF for their assistance in transforming Leng Chanthy from a cleaner into one of the Kingdom’s first accredited female football coaches.
In an interview with the Post, Chanthy Leng, said her greatest ambition was to “move up the ladder” of football coaching.
“I had no idea what football was like, but I fell in love with it the day I got involved,” she said. “I feel sad. I wish I had gone to a school. I am beginning to learn to read a bit now and perhaps to write.”
Chanthy, who travelled to Laos as assistant coach with the national women’s team last year, has to endure a two-year wait to prove her worth as a coach if she wants to bid for a B-licence. She currently coaches more than 70 boys and girls drawn from local NGOs Hagar, SOS, ISF and AZIZA.
“To be a track suited coach is an honour. To be one of only two women nationwide doing it is a matter of pride for us,” said Griffin. “She can be with ISF as long as she wants.”
Posted by CAAI News Media at 11:21 pm