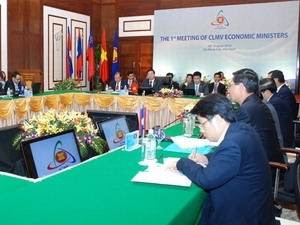 The economic ministers of Cambodia, Laos, Myanmar and Vietnam (CLMV) met for the first time in Vietnam’s coastal city of Da Nang on August 28 to seek ways to boost economic and trade ties between their countries.
They also sought to work more closely in sub-regional, regional and global forums, maximise their countries’ potential, narrow the development gaps between the four and other countries in the region and the world, and speed up implementation of the agreements reached at previous CMLV summits.
The ministers acknowledged that the four countries have attained considerable development in economic and trade ties in recent years and there is still a lot of potential for increasing these gains by developing border markets and cross-border trade.
On trade, they agreed to focus on facilitating trade exchange, enhancing trade promotion activities, and boosting investment flows among the four countries in line with the joint declaration of the fourth CLMV Summit in Hanoi on November 6, 2008.
The ministers agreed to encourage investment in special economic zones (SEZs) and export processing zones (EPZs) lying along their borders with preferential treatment regarding infrastructure and administrative procedures targeting CLMV investors.
Debating human resources development, they underscored the important role of programmes to provide vocational training and enhance the capacity of public administrative officials.
They shared the view that their countries need to boost their policy co-ordination at sub-regional, regional and international co-operation forums to attract resources from developed partners to narrow the development gap between the CLMV and other ASEAN countries.
The ministers proposed reinforcing their co-operation in making and implementing projects within the framework of the second IAI Working Plan, cooperating closely in tailoring prioritised projects within the sub-regional co-operation frameworks, and stepping up co-operation with regional and international organisations and dialogue countries.
The ministers also discussed conducting research and assessments to figure out challenges and shared potentials as well as measures to boost trade and investment among their countries, and enhance co-operation in FTA negotiations and other negotiations for benefit of each country and the entire group.
They agreed to continue to study the establishment of a CLMV Development Fund as suggested by Cambodian Prime Minister Hun Sen, which aims at gaining financial assistance from other countries to improve the development gaps.
The ministers decided that they will meet twice a year along with the ASEAN Economic Ministerial Meeting and that their countries will rotate the coordinating role.
They highly valued the ASEAN Secretariat’s assistance in preparing and organising their first-ever meeting and expressed hopes to that the ASEAN Secretary General or Deputy Secretary General will attend their future meetings. (VNA)
Posted by CAAI News Media at 11:06 pm