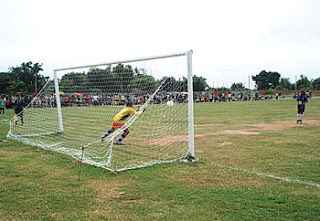 Battamabang’s Mao Reaksmey misses her penalty to hand Siem Reap victory in their National Women’s Football Championship semifinal on Saturday at Meanchey University in Banteay Meanchey. Siem Reap play Banteay Meanchey in the final today. Photo by: Sam Schweingruber
via CAAI
Monday, 13 September 2010 15:00 H S Manjunath
Hosts Banteay Meanchey and tenacious Siem Reap set up today’s final showdown in the inaugural National Women’s Football Championship with contrasting semifinal wins at Meanchey University ground on Saturday. A passionate home town crowd had plenty to cheer about when Banteay Meanchey obdurately held on to a 38th minute goal by the ever-reliable Kim Sopheak to down a stoic Steung Treng 1-0. But the second semifinal produced plenty of drama and excitement as group B toppers Battambang imploded in a penalty shootout to hand victory on a platter to Siem Reap.
With the whistle for kick off still ringing in the ears, Siem Reap opened the scoring off practically their first touch when then Battambang defence, still in slumber, allowed Yaw to sneak in and score. Clearly shaken by this unexpected blow, Battambang went hammer and tongs for the equaliser.
It took 28 minutes of constant pressure on the Siem Reap goal to open up a crack, as Srey Neth landed a long range effort to level the scores. Not to be outdone, Siem Reap were back in business when captain Mok Savern’s firmly struck free kick found a fortunate deflection on the way into the net.
With Battambang down for the second time, their forward line, credited as the best during the group stage, was called upon once again. Dep Panida came to her side’s rescue when she judged a long drive to perfection.
Regulation time ended 2-2, and two short spells of extra time saw the stalemate extended to force a dreaded penalty shootout.
Three of Battambang spotkicks were so wayward that the goalkeeper needn’t move a muscle, and Siem Reap duly wrapped up a 5-4 aggregate scoreline to progress to today’s championship match.
In Saturday’s early semifinal, a slender scoreline concealed Banteay Meanchey’s total dominance. The hosts supplied a steady stream of attacks into Stung Treng’s territory, and even stumbled upon an early penalty only for Em Lun to make a mess of it.
One probing move involving Kim Sopheak as the pivot ended in the only goal of the match, the striker neatly deflecting home a stray pass inside the penalty area.
Stung Treng missed two clear chances to level scores towards the end, allowing Banteay Meanchey a final place.
Posted by CAAI News Media at 9:33 pm