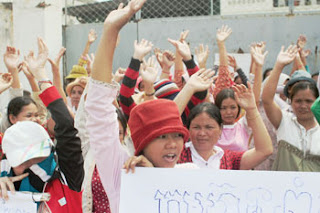 Photo by: Pha Lina
Employees of the Sun Ly Fong garment factory in Meanchey district raise their hands while demonstrating during a strike last month.
via CAAI
Monday, 13 September 2010 15:02 Chhay Channyda
PHNOM Penh Municipal Court is set to question additional witnesses in a case against three garment factory union leaders who are accused of incitement and destruction of private property, a court official said.
Ien Pov, Heng Bora and Nun Chamnan were questioned at the court on Friday on charges linked to last month’s strike at the Sun Ly Fong garment factory in Meanchey district.
“They told us that they did not lead a strike or do anything illegal,” said Thong Sithan, a court clerk. “Therefore, we will ask their co-workers to be their witnesses in this case.”
He said that representatives from the Sun Ly Fong factory had demanded that the three men each pay US$60,000 for loss of revenue and property damage.
About 160 workers from the factory went on strike in August to demand improved working conditions. On August 26, the court ruled that the strike was illegal, paving the way for the dismissal of the three union leaders. The remaining workers were ordered to return to work.
During Friday’s hearing, Ien Pov denied that he had incited the workers to strike.
“All the workers agreed to strike because the factory did not respect our demands about job conditions,” he said, and denied that workers had resorted to violence during the strike.
Moeun Tola, head of the labour programme at the Community Legal Education Centre, which provided a lawyer for the three men, said he welcomed the court’s decision to call further witnesses.
“They are not the leaders of the strike, just union leaders,” he said. “All the workers decided to go on strike together.”
Posted by CAAI News Media at 10:13 pm