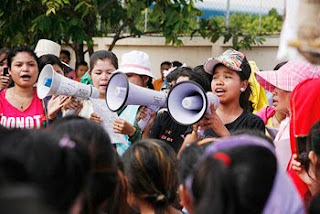 Photo by: UY NOUSEREIMONY
Workers decry the new minimum wage during a strike at the Grantex garment factory in Phnom Penh on Wednesday.
via CAAI
Thursday, 16 September 2010 20:59 Kim Yuthana and Brooke Lewis
A UNION leader said yesterday that he had called off a mass garment sector strike that began on Monday -- and was originally scheduled to last for five days -- after the government indicated a willingness to negotiate benefits for workers earning the minimum wage.
Ath Thun, head of the Cambodian Labour Confederation, announced the strike shortly after a July decision from the government and industry representatives that set the minimum wage for garment workers at US$61 per month.
The new rate, which is set to go into effect in October, increased the previous minimum wage, established in 2006, by $5, falling far below the $93 dollars that union leaders had campaigned for.
“If they do not give us the chance to hold new negotiations, we will still hold the strike,” Ath Thun said last month.
Yesterday, however, Ath Thun said that he had called off the strike at midday after receiving a letter from the Ministry of Social Affairs inviting employers and union representatives to meet later this month to discuss “benefits” for those receiving the minimum wage.
The letter, signed by Social Affairs Minister Ith Sam Heng, states that, during a meeting to be held on September 27, “we will discuss an agenda connected with some benefits for the workers to add to the minimum wage”.
Ath Thun yesterday said that although the letter did not mention the prospect of revising the minimum wage, the proposed meeting was a sign that the strikes had been successful.
“It is really a success for the workers because the strike has not yet finished but it made the government officials agree to negotiate with us,” he said. ... read the full story in tomorrow’s Phnom Penh Post or see the updated story in online from 3PM UTC/GMT +7 hours. (New York 4AM, Los Angeles 1AM, Chicago 3AM, Paris 10AM, Toronto 4AM, Sydney 6PM, Bejing 4PM, Tokyo 5PM, London 9AM, Johannesburg 10AM, Riyadh 11AM, Mumbai 1:30 PM)
Posted by CAAI News Media at 8:07 am