Three Questions: The Khmer Rouge and the Legal System 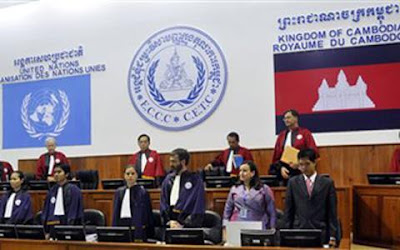 Photo: AP
The Khmer Rouge Tribunal, known as the Extraordinary Chambers in the Courts of Cambodia (FILE)
As lawyers prepare to try the top four former Khmer Rouge leaders, they are employing a little known, complex legal strategy called the Joint Criminal Enterprise. The JCE may help prosecutors hold all the individual defendants responsible for crimes the group committed from 1975 to 1979.
To better understand this theory, VOA spoke to John Ciorciari, an assistant professor with the University of Michigan's Gerald R. Ford School of Public Policy.
Why are prosecutors pursuing JCE?
Ciorciari: "Joint Criminal Enterprise makes it easier to convict the defendants because it convicts them for their membership and participation on a team of people who were engaged in a common criminal plan and were taking different acts in furtherance of that plan. That said, the defense lawyers are going to have some powerful counter arguments that this Joint Criminal Enterprise theory was developed or, at least, advanced and expanded during the 1990s in the criminal tribunal for the former Yugoslavia. And that's almost 20 years after the fall of the Pol Pot regime. One of the basic principles of criminal law is that we can't convict people for crimes that didn't exist at the time that they committed the acts in question. So, if I committed an act in 1975, the law that applies is the law that existed in 1975. And there is some debate in the legal community about whether Joint Criminal Enterprise was formed as a doctrine by the 1970s. And there's a separate debate about exactly what the contours were of that doctrine to the extent that it had formed. And we're going to hear a lot about that as this trial unfolds."
Do you think this is a wise move on the part of the prosecutors?
Ciorciari: "I think it's certainly wise for them to argue that Joint Criminal Enterprise should apply. At the same time, they should be looking for alternative or parallel ways to hold the defendants responsible. So if for some reason the Joint Criminal Enterprise theory fails, they'll still have something to fall back on, such as principles of superior responsibility or maybe in some rare cases, theories that the defendants were more directly involved in the crimes they were accused of."
How strong is the evidence against the defendants?
Ciorciari: "The circumstantial evidence, of course, is overwhelming that terrible things happened. And that gives rise to a reasonable inference about the extent of knowledge that senior officials would have had about the crimes that were happening in their regime. However, there are not a lot of 'smoking gun' documents available connecting specific defendants to specific crimes in the field. There are a few reasons for that. One is that in general, leaders try to avoid leaving long, obvious paper trails. And secondly, many of the documents were destroyed in late 1978 or early 1979, before the Pol Pot regime packed its bags and moved out of town as the Vietnamese army and the resistance approached. And so, prosecutors will have to try to piece things together like a puzzle to establish responsibility either jointly through this Enterprise theory, or individually through principals of superior responsibility."
Posted by CAAI News Media at 8:57 am