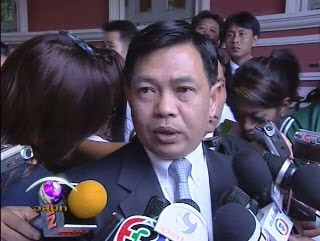 
via Khmer NZ
BANGKOK, Sept 1 – The border trade between Thailand and Cambodia looks promising after the political conflicts between the neighboring countries has eased, according to Deputy Commerce Minister Alongkorn Ponlaboot.
Speaking of his trip with the Thai public and private-sector delegation to Cambodia and Vietnam August 28-30, Mr Alongkorn said it is part of Thailand's mission to explore logistic routes linking goods transport between Thailand, Cambodia and Vietnam.
During the trip, bilateral talks were held to expand trade cooperation between Thailand and Cambodia after the political conflicts between both countries had subsided.
Mr Alongkorn said he had an opportunity to meet with Thai businesspersons investing in Cambodia and was informed that the trade between both countries had become active again.
In the first seven months of this year, border trade value between Thailand and Cambodia increased by more than 70 per cent.
It is expected border trade will rise rapidly and reach Bt70 billion in value this year compared with Bt50-60 billion last year.
He said the government had also proposed establishment of a Thai-Cambodian Business Council to serve as a venue for discussion between representatives of official and private business sectors, organisation of trade exhibitions, and business matching.
The government targeted making Thailand become Cambodia's number-one trade partner next year.
Currently, the country ranks second after the United States, he added. (MCOT online news)
Posted by CAAI News Media at 10:48 pm